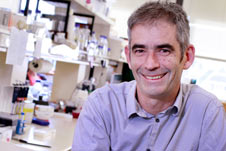 Deadly familial stomach and lobular breast cancers could be successfully treated at their earliest stages, or even prevented, by existing drugs that have been newly identified by University of Otago cancer genetics researchers.

The researchers, led by Professor Parry Guilford, show for the first time that the key genetic mutation underlying the devastating conditions also opens them to attack through drug therapies targeting other cellular mechanisms.

There is currently no treatment for this kind of gastric cancer other than surgical removal of the stomach as a preventive measure in those identified as carrying the mutated gene. Lobular breast cancer is hard to detect by mammography and mastectomies are also undertaken by some carriers.

The researchers’ findings appear in the US journal Molecular Cancer Therapeutics.

The team used genomic screening to search for vulnerabilities in the cancer cells that lack the tumour-suppressor protein E-cadherin. The genetic mutation that causes this protein to be lost is common in hereditary diffuse gastric and lobular breast cancers.

E-cadherin is not a traditional drug target for these forms of cancer because the protein is present in healthy cells but absent in malignant ones. However, Professor Guilford and his team predicted that its loss might create other vulnerabilities in these cancer cells.

Professor Guilford says the research team used an approach of searching for ‘synthetically lethal’ combinations of E-cadherin loss with inactivation of other proteins, which together cause cell death.

After conducting a genome-wide functional screening of non-malignant human breast cells with, and without, E-cadherin loss, they identified a large number of such vulnerabilities that can be targeted by existing drug compounds.

PhD student and study lead author Bryony Telford says further analysis showed that the most promising avenues of attack were against G-protein coupled receptor (GPCR) signalling proteins and those involved in maintaining the cell cytoskeleton.

“We found that GPCR proteins were strikingly abundant in cells lacking E-cadherin, as were diverse types of cytoskeletal proteins,” Ms Telford says.

Next, the researchers screened selected drug classes known to interfere with these proteins, and found that the E-cadherin-lacking cells proved highly sensitive to many of the compounds while their normal counterparts did not.

Professor Guilford says that the synthetic lethal effects identified are highly promising for developing early chemoprevention treatments for people who carry the E-cadherin mutation and as a result are at high risk of gastric and lobular breast cancers.

“Making such drug treatments a reality would mean delaying or completely avoiding the trauma that high-risk individuals experience by undergoing major preventive surgery at a young age,” he says.

The study was undertaken in collaboration with researchers from Melbourne’s Peter MacCallum Cancer Centre and the University of Melbourne. The drugs were screened at the Walter and Eliza Hall Institute’s High-Throughput Chemical Screening Facility in that same city.

Professor Guilford’s work was supported by the Health Research Council of New Zealand.

In the 1990s he began leading an ongoing collaboration with a large Māori family from the Bay of Plenty that identified E-cadherin as the first known gene for inherited gastric cancer.

This allowed family members to be tested for the gene and to decide whether to take preventative action. This research was originally published in the leading journal Nature in 1998 and the findings have now led to hundreds of lives being saved around the world.

Kimihauora Trust Manager Maybelle McLeod, who originally contacted the University and Professor Guilford to seek help in discovering the cause of the disease ravaging her family, says the findings are very exciting.

“The only choice at the moment for those of us at genetic risk is to undergo drastic surgery, and having your stomach removed is a hard thing to bite. This latest research holds out a new hope for a gentler way to save the lives of our affected whanau members,” Ms McLeod says.