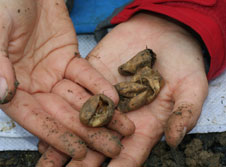 A selection of eggshells from the nest, including one in the foreground with a large split indicating hatching. Photo: Alison Cree

University of Otago researchers have found evidence of tuatara eggs hatching in a nest at Orokonui Ecosanctuary, the first indication of this happening anywhere in the wild in the South Island for several hundred years.

The researchers, who have spent two years monitoring the fate of tuatara eggs laid in nests at Orokonui in late 2012, have now been rewarded for their patience.

Wild populations of tuatara disappeared from the North and South Islands soon after the arrival of humans and predatory mammals.

The eggs were in a nest discovered in late 2012 by Scott Jarvie in the course of his PhD research monitoring tuatara at Orokonui Ecosanctuary, a 307-ha site near Dunedin.

At Orokonui, tuatara and other native animals are protected from introduced mammals by a specially constructed fence. Wild tuatara, including adult females, had been translocated from Stephens Island (also known as Takapourewa) to Orokonui in October 2012 with the support of guardian iwi Ngāti Koata of the Nelson region.

Tuatara eggs are laid in the soil. “At least two of the adult females must have been carrying shelled eggs when transferred, as they nested soon afterwards” explains Dr Anne Besson, a member of the research team.

The researchers continued to check on the nests. At the end of March 2015 they found the evidence they were hoping for. An excavated nest contained three empty eggshells with the characteristic splits that hatchlings make to exit the shells. Some other eggs had collapsed and failed.

Research team leader Dr Alison Cree, an associate professor at the University of Otago, says the discovery provides the first indication that tuatara eggs can hatch after a “remarkable” two winters in the ground.

“With New Zealand reptiles, you have to be in for the long haul, unlike many birds where nesting success may be apparent within a few weeks or months,” she continues.

Ecosanctuary staff were delighted with the news and look forward to the hatchlings becoming more visible as adults in about 15 years’ time. Chris Baillie, General Manager, said "Although these hatchlings are not able to be seen by the public, two young captive-bred tuatara are often seen basking in a special enclosure near the Ecosanctuary entrance."

The research team now has thousands of images from time-lapse cameras to check to try to detect the time of hatching more precisely.