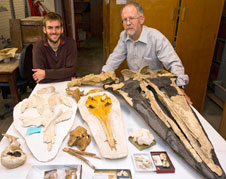 New University of Otago research is providing the most comprehensive picture of the evolutionary history of baleen whales, which are not only the largest animals ever to live on earth, but also among the most unusual.

Most other mammals feed on plants or grab a single prey animal at a time, but baleen whales are famous for their gigantic mouths and their ability to gulp and filter an enormous volume of water and food.

The pair says that similar family trees have been constructed before, but theirs is by far the largest and, crucially, the first to be directly calibrated using many dated fossils.

The research shows which whales are related and exactly how long ago every branch of the tree—whether extinct or still alive—first arose.

This new family tree allows the researchers to estimate: (1) how many species of baleen whale have existed, (2) similarities and differences between different lineages in terms of overall body shape, and (3) how fast baleen whales evolved at any chosen time over the last 40 million years.

“We find that the earliest baleen whales underwent an adaptive radiation, or sudden ‘evolutionary burst’, similar to that of ‘Darwin’s finches’ on the Galapagos Islands,” says Professor Fordyce.

Dr Marx adds that this early phase of whale evolution coincided with a period of global cooling. At the same time, the Southern Ocean opened, and gave rise to a strong, circum-Antarctic current that today provides many of the nutrients sustaining the modern global ocean.

The researchers found that during their early history, whales branched out into many different lineages, each with a unique body shape and feeding strategy.

“Rather surprisingly, many of these early whales were quite unlike their modern descendants: Although some had baleen, others had well-developed teeth and actively hunted for much bigger prey than is taken by modern species,” says Professor Fordyce.

Yet, after a few million years of co-existence, the toothed ‘baleen’ whales disappeared, leaving behind only their filter-feeding cousins, he says.

That extinction occurred between 30 and 23 million years ago and was about the time that the circum-Antarctic current reached its full strength, providing more nutrients that made filter feeding a more viable option.

The researchers say that the toothed ‘baleen’ whales disappeared perhaps because of increasing competition from other newly evolved toothed marine mammals, such as dolphins and seals.

They found that filter-feeding whales remained successful and diverse until about 3 million years ago, when the number of lineages suddenly crashed.

“This decline was driven mainly by the disappearance of small species of baleen whale, which left behind only the giants—ranging from 6 to as much as 30 metres—that plough the ocean today,” says Dr Marx.

He says the disappearance of small whales likely resulted from the onset of the ice ages, which altered the distribution of available food, caused shallow water habitats to shift or sometimes disappear, and created a need for long-distance migration between polar feeding grounds and equatorial breeding grounds.

“This behaviour—long distance-migration—is still one of the hallmarks of all baleen whales alive today,” notes Professor Fordyce.