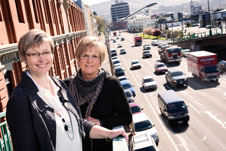 Young New Zealand drivers who gain a time discount on their restricted licences for taking a defensive driving course (DDC) are more likely to be caught committing traffic offences once they are fully licensed, according to new University of Otago research.

The findings emerge from the New Zealand Drivers Study (NZDS), a nationwide study of 3992 newly licensed car drivers. When 1763 drivers were interviewed upon gaining their full licence, it was found that 49% had taken part in a DDC and of these 868 drivers, 748 (86%) received a time discount.

In New Zealand, taking a DDC or a ‘Street Talk’ course qualifies the driver for a time discount of 6 months (or 3 months for those over 24 years) during the 18-month restricted licence stage.

The paper was co-authored by Drs Dorothy Begg and Rebecca Brookland of the University’s Injury Prevention Research Unit and appears in the Journal of Safety Research.

In their paper the pair writes that prior to receiving their full licence, those in the DDC group were found to be “relatively low-risk, law-abiding young drivers who could be expected to go on and be relatively safe fully licensed drivers”.

Dr Begg says this included the DDC group being less likely than the others to have received a traffic offence notice or been involved in a crash while on their learner or restricted licence.

“However, once this group of drivers moved into the first years of their full licence, we discovered that they were 40% more likely to receive a traffic offence notice; this reducing to 10% higher after controlling for other factors that included age, gender, drug and alcohol use, and personality characteristics,” she says.

The most common offence amongst the group was speeding, with 46% of the time-discount group receiving at least one speed offence notice, compared with 30% of the others.

The authors concluded that the results of this study, when viewed together with other NZ crash evidence, indicate that a time discount should not be given for completing a DDC or Street Talk course.