Dr Nic Rawlence, who carried out the genetic study, says the team found a very distinctive pattern, where shag/mapua (Leucocarbo chalconotus) populations from the Stewart Island region were little affected by human hunting, but mainland populations were rapidly decimated.

“There was a loss of more than 99% of their population size within 100 years of human arrival. These once heavily-hunted mainland populations now occupy only a fraction of their prehistoric range, having never really recovered,” Dr Rawlence says.

The study suggests that the mainland populations survived on just a few rocky islands off the South Island’s east coast.

“Interestingly, recent archaeological studies suggest that human numbers declined in the Stewart Island region around 1500 AD, a factor which seems to explain why wildlife persisted in this region,” he says.

Project leader Professor Jon Waters says that scientists have long argued about the causes of prehistoric wildlife declines and extinctions—some pointing the finger at humans, and others attributing the shifts to climate change.

“By showing drastically different wildlife histories—between regions that are climatically similar—we can start to understand the major impact of prehistoric human hunting, which differed across space and time,” Professor Waters says.

This Marsden- and Allan Wilson Centre- funded research included team members from the Universities of Otago, California, and Arizona, as well as Canterbury Museum and the Museum of New Zealand Te Papa Tongarewa.

The team’s findings have been published this week in the leading international journal Molecular Ecology. 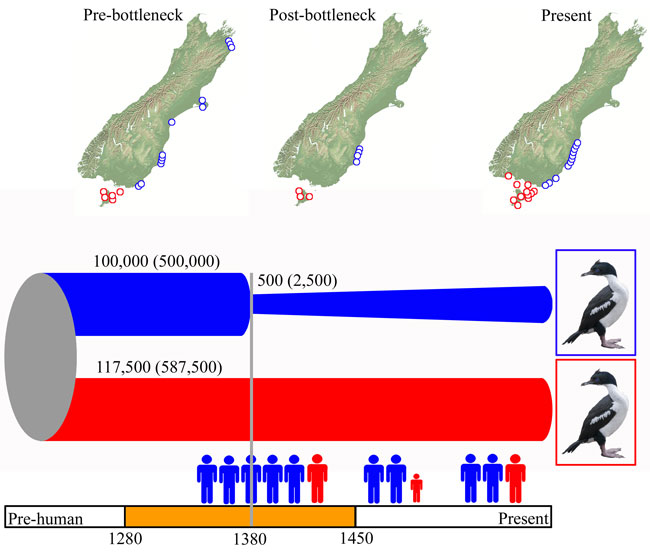