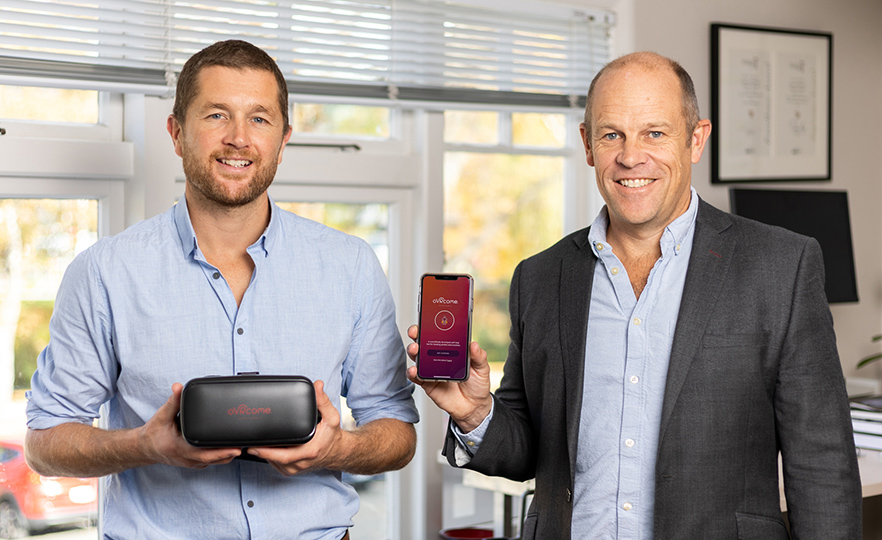 Results from a University of Otago, Christchurch trial suggest fresh hope for the estimated one-in-twelve people worldwide suffering from a fear of flying, needles, heights, spiders and dogs.

The app was paired with a headset to immerse participants in virtual environments to help treat their phobia.

The results from the trial, just published in the Australian and New Zealand Journal of Psychiatry, showed a 75 per cent reduction in phobia symptoms after six weeks of the treatment programme.

“The improvements they reported suggests there’s great potential for the use of VR and mobile phone apps as a means of self-guided treatment for people struggling with often-crippling phobias,” Associate Professor Lacey says.

“Participants demonstrated a strong acceptability of the app, highlighting its potential for delivering easily accessible, cost-effective treatment at scale, of particular use for those unable to access in-person exposure therapy to treat their phobias.”

A total of 129 people took part in the six-week randomised, controlled trial, between May 2021 and December 2021, with a 12-week follow-up. Participants needed to be aged between 18–64 years, have a fear of either flying, heights, needles, spiders and dogs. They were emailed weekly questionnaires to record their progress. Those experiencing adverse events could request contact from a clinical psychologist at any stage.

“Participants experiencing all five types of phobia showed comparable improvements in the Severity Measures for Specific Phobia scale over the course of the trial. The average severity score decreased from 28/40 (moderate to severe symptoms) to 7/40 (minimal symptoms) after six weeks. There were no participant withdrawals due to intervention-related adverse events.

“The oVRcome app involves what’s called “exposure therapy”, a form of CBT exposing participants to their specific phobias in short bursts, to build up their tolerance to the phobia in a clinically-approved and controlled way,” Associate Professor Lacey says.

“Some participants reported significant progress in overcoming their phobias after the trial period, with one feeling confident enough to now book an overseas family holiday, another lining up for a COVID vaccine and another reporting they now felt confident not only knowing there was a spider in the house but that they could possibly remove it themselves.”

The app programme consisted of standard CBT components including psychoeducation, relaxation, mindfulness, cognitive techniques, exposure through VR, and a relapse prevention model. Participants were able to select their own exposure levels to their particular phobia from a large library of VR videos.

“This means the levels of exposure therapy could be tailored to an individual’s needs which is a particular strength. The more traditional in-person exposure treatment for specific phobias have a notoriously high dropout rate due to discomfort, inconvenience and a lack of motivation in people seeking out fears to expose themselves to. With this VR app treatment, triallists had increased control in exposure to their fears, as well as control over when and where exposure occurs,” says Associate Professor Lacey.

The researchers say this trial was novel, due to the cost-effective availability of the app and headsets and the fact that multiple phobias were tested at once. They say most comparative VR studies to date have investigated high-end VR devices which are only available in research and limited clinical settings. One Dutch study examined a low-cost VR Dutch-language program using animated imagery that demonstrated improvement in fear-of-height symptoms, however this study only examined a single type of specific phobia.

Associate Professor Lacey says public demand to take part in the trial was unprecedented, demonstrating the increasing need and desire for phobia treatment in the community.

“An estimated ten per cent of New Zealanders have been hesitant to take part in the government’s COVID‑19 vaccination programme due to needle phobia. This hasn’t been helped by a significant shortage of psychologists. A petition to Parliament last year claimed New Zealand is 1,000 psychologists short, causing ballooning wait times nationwide, making it difficult for people to access help if needed. We need to further research and explore the use of more cost-effective, easily-accessible, home-based solutions such as this oVRcome app, to provide people with the treatment and support they need.”

This study builds on the Department of Psychological Medicine’s existing research into structured psychotherapy for mental distress.

If you are interested in learning more about recruitment for the next stage of the trial, visit the oVRcome website:

If you have an enquiry about this news article, please contact: