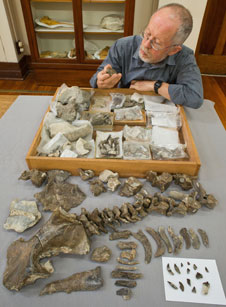 A new species of fossil baleen whale that lived in the North Pacific Ocean 30 to 33 million years ago has been described by researchers from the University of Otago.

The whale, named Fucaia buelli by the researchers, is transitional between ancient toothed whales and the baleen whales of modern seas. It is one of the oldest baleen whales ever found and, at a length of about 2-2.5m, also one of the smallest.

The fossil, which was recovered from Olympic Peninsula, Washington State, USA, is described in a newly published paper in the UK journal Royal Society Open Science.

Paper co-author Dr Felix Marx says that unlike its living baleen whale relatives, which use comb-like baleen plates to filter krill from the surrounding water, Fucaia had well-developed teeth which it used to actively hunt and chew its prey.

“Once captured, prey was likely sucked deeper into the mouth for swallowing—a technique which, ultimately, may have given rise to baleen and filter feeding in the modern Mysticeti suborder of whales,” Dr Marx says.

Dr Marx and his co-authors Dr C.H. Tsai and Professor Ewan Fordyce say that the fossil sheds new light on one of the big questions in mammalian evolution; how, when and why did modern baleen whales lose their teeth?

The complex teeth in Fucaia, and distinctive wear patterns, show that Fucaia likely chewed its food. Long-based and closely-spaced teeth in the jaw leave little room for baleen, but there are some indications that Fucaia perhaps had enlarged gums.

“We think that Fucaia was similar to modern dolphins in capturing its prey using its teeth and perhaps strong suction. Suction feeding likely enabled early whales to move from a tooth-based feeding style to filter-feeding, by allowing them to capture smaller prey items than teeth alone could handle,” Dr Marx says.

The researchers note that suction feeding can still be seen in living grey whales.

“This behaviour may have prompted the evolution of baleen from the enlarged gums, possibly as a more efficient way to expel the water sucked in with the food. As the prey became smaller, teeth became increasingly obsolete and, ultimately, were lost completely in modern baleen whales,” says Professor Fordyce.

A fossil partial skull, teeth, and associated skeleton of a small toothed whale, estimated 2-2.5 m long. This tiny whale was an adult individual, judging from fused bones in the skeleton.

The species is new to science, and is named Fucaia buelli. Fucaia is named after the Strait of Juan da Fuca, in honour of its origin along the shores of those waters. Its second name, buelli, honours the exceptional illustrations of extinct whales produced by palaeo-artist Carl Buell.

Fucaia belongs in a well-known extinct group, the family Aetiocetidae. (There is no common name for that group, but the meaning is roughly “beginning whale.”) Such animals are transitional between toothed archaic whales and modern baleen whales.

The specimen is from the Burke Museum of Natural History and Culture, at the University of Washington, Seattle, Washington, USA.

How did it live?

Fucaia was probably an active hunter. It may have used suction to “vacuum” small prey into its mouth. Wear patterns on the teeth indicate that Fucaia used its teeth to secure and chew its food. The small body size suggests that the species had a limited range, and did not migrate like the large whales of modern oceans.

Where was the fossil found?

The single known specimen of Fucaia buelli is from a shoreline outcrop on the north coast of the Olympic Peninsula, Washington State.

When did the whale live?

Fucaia buelli lived early in Oligocene times, some 33-31 million years ago. At that time, the region that is now Olympic Peninsula was under-sea. At a global scale, this was a time of climate change. The earth changed from warm and even tropical “greenhouse” conditions to cooler “icehouse” conditions which saw ice-caps develop on Antarctica.

The fossil was recovered as a cemented boulder (or concretion), by James L. Goedert and Bruce Crowley of the Burke Museum, University of Washington.
Goedert is a well-known fossil collector, with many important finds to his credit.

How was the fossil extracted?

In the lab, the fossil was extracted from its surrounding matrix using pneumatic chisels and dilute acid. The preparation was carried out at the Burke Museum, University of Washington, and at the University of Otago, Dunedin, New Zealand.

All the participating scientists are carrying out research on fossils to help understand the history of whales and dolphins. This study is one of several studies based on whale and dolphin fossils of the Burke Museum, University of Washington.