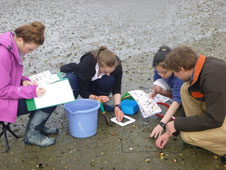 A new marine community monitoring initiative, led by the University of Otago’s Department of Marine Science and the New Zealand Marine Studies Centre, is set to begin exploring the consequences of dredging on Otago Harbour’s rocky shore communities.

Funded by the Otago Pilot of the Participatory Science Platform, the Sediment and Seashores monitoring project is an opportunity for school and community groups to work alongside marine scientists to establish monitoring sites, then photograph and survey the marine community over time in order to assess the effects of dredging on the shoreline.

Project organisers are currently recruiting school groups to the project which will begin data collection in Term 1 of the new school year.

New Zealand Marine Studies Centre director Sally Carson says despite the fact that Otago Harbour has been dredged since 1868, scientific evidence on how marine habitats and species in the harbour are impacted by dredging activities is limited.

“Although some monitoring of the marine species in Otago Harbour is being done already, it so far has only focused on a few key habitats like seagrass and subtidal rocky reefs. This is the first time we’ll be examining dredging’s impact on the rocky intertidal community,” she says.

The marine scientists behind the initiative hope that data collected as part of the monitoring project will provide key information on how marine species and the habitats that support them in the harbour are impacted by, and respond to, the dredging programme.

“This information will be invaluable not only in future dredging programmes in Otago Harbour but nationwide as well.”

The Sediment and Seashores monitoring project is open to primary and secondary schools as well as community groups in Dunedin.

“We are particularly interested in working with schools located along the shores of the Otago Harbour but some funding is available for bus transport for schools in other parts of Dunedin who would like to be involved.”

Those wishing to participate in the monitoring initiative can contact New Zealand Marine Studies Centre director Sally Carson at sally.carson@otago.ac.nz or on 03 479 5842.

The Sediment and Seashores monitoring project is supported by funding from the Otago Pilot of the Participatory Science Platform (Ministry of Business, Innovation and Employment’s A Nation of Curious Minds Fund).