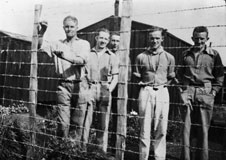 A University of Otago academic researching the experiences of the families of New Zealand’s conscientious objectors is gauging interest in a “truth and reconciliation” gathering in mid-October 2017.

Sociologist Associate Professor Martin Tolich says that many families have kept quiet about the discrimination suffered due to their loved ones’ principled acts of bravery in defying the call to arms.

Associate Professor Tolich says he wants to detail how such families experienced the consequences of being labelled a ‘conchie’ family during the two world wars and how they continue to experience these today.

“These men followed an internal conviction to do what is right, often at great personal cost to themselves and their families,” he says.

By WWI’s end, 273 conscientious objectors were in prison in New Zealand for refusing to serve and 2600 lost their civil rights. This included being denied voting rights for 10 years and being barred from working for government or local bodies.

WWII saw 800 of New Zealand’s 5000 conscientious objectors labelled “military defaulters” who were then interned behind barbed wire in specially built camps in remote areas of the country. After release, they also were deprived of the right to vote for 10 years.

Associate Professor Tolich is inviting people to share their stories and also canvassing interest in a two-day truth and reconciliation conversation, similar to recent community events in Ireland.

This would likely take place in mid-October 2017 in Dunedin and begin with oral or written submissions on the first day followed by a service of reconciliation on the second.

He was prompted to pursue the initiative after hearing the stories of families present at the 2014 fundraising launch for a monument to New Zealand’s most well-known conscientious objector, Archibald Baxter.

“What surprised a non-family member like me is that these stories are as real now as they were a century ago.

“It became clear that conscientious objection is living history and the stories shared were in the first instance of grandfathers, fathers and brothers who had taken a stand of conscience.

“Yet within these stories was collateral damage; family members forced by neighbours and the wider community to bear witness to these actions. Whether the stories were of the First or Second World War did not change the intensity of this retelling.”

Associate Professor Tolich has a secondary academic interest in this collecting this material.

He is an internationally renowned research ethicist whose recent Marsden Grant produced three books and numerous articles on tensions in ethics review and Maori consultation. He says the ethics of this current project are themselves worthy of a book.

Associate Professor Tolich has gained approval from the University of Otago Human Ethics committee to both record (and with permission) store these stories, which he calls family heirlooms, in the Hocken Library.

“These stories belong to the family and I know that some families may want to take part in the research but they are not ready to share these stories. If they do, these stories would be archived and embargoed until the family gave permission for others to read them,” he says.

Preliminary discussion with some conscientious objectors’ families has unearthed tremendous treasure troves of written journals of persecution, some of which have the words, “share only within the family” emblazoned on each page, he says.

“Students in my Sociology classes provide rich stories of grandparents’ objection to war but when I ask for them to share the story they quite rightly catch themselves, recognising their story is also their family’s story. They end saying, ‘I’ll tell you the whole story when Pops passes.’”

Family members who wish to share their stories are invited to get in touch with Associate Professor Tolich.