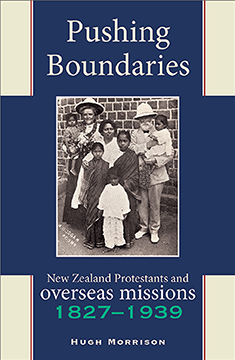 In the late 19th and early 20th Centuries New Zealand churches were heavily invested in missionary work. By 1939, when our population was at 1.5 million, over 1000 Protestants were or had been involved in missionary activity in other parts of the world.

Pushing Boundaries is the first book-length account of the evolution of overseas missionary activity by New Zealand’s Protestant churches up to World War II.

Prior to the age of international travel overseas missions were a significant form of contact between different cultures. Yet missionary activity has often been subject to negative stereotyping or, on the other hand, to uncritical adulation.

“Looking at how and why missions became important broadens our understanding of religious history in New Zealand and further enriches our appreciation of the ways in which both local and global influences have shaped our society,’ says Dr Morrison.

This book illuminates the New Zealand missionary experience within an international context, connecting our local story to larger historical themes such as gender, culture, empire, childhood and education.

Dr Morrison is a senior lecturer in the College of Education at the University of Otago, where he has taught since 2008 in both initial teacher education and education studies programmes. Earlier he has been a high school teacher, youth worker and a contract history lecturer at the University of Waikato (where he is a research associate in the history programme). His research and writing has revolved around the comparative history of religion, missions and childhood across British world settings.