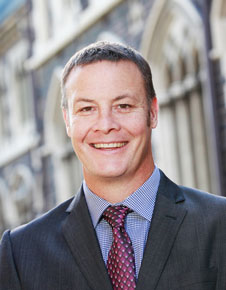 Mr Dave Scott takes up his new role as Proctor at the end of May. Photo: Sharron Bennett.

The University has appointed a senior Dunedin Police officer, Mr Dave Scott, as its new Proctor.

Senior Sergeant Scott is currently the Dunedin Area Response Manager, a role with responsibility for the day-to-day running of all frontline policing activities. Before that he was a Southern Police District Centre Coordinator. He will take up his new role at the end of May.

Announcing the appointment, Vice-Chancellor Professor Harlene Hayne says she is delighted that someone of Mr Scott’s calibre and experience is taking up the role of Proctor at the University.

“Dave Scott is extremely well-placed to take on this key role, the prime objective of which is to enhance our campus lifestyle, provide pastoral care to our students, and build on our highly-valued town/gown relationship by ensuring a safe and healthy environment for all,” Professor Hayne says.

In 2013, Mr Scott worked closely with a range of stakeholders to introduce changes to the annual Hyde St Event to ensure that it was safe, well-run and as incident-free as possible. He has also operated as the police forward commander at the event for the past four years.

His new role as Proctor will include monitoring and positively influencing student behaviour and safety, on- and off- campus. As part of this work, he will lead efforts within the University to develop new evidence-based initiatives to enhance student behaviour and safety. Additionally, he will supervise the five Campus Watch Team Leaders and their 40 members and be responsible for Emergency Management at the University.

Mr Scott says the University of Otago is a world-class institution and he is excited to be taking on a role that he expects to be both challenging and rewarding.