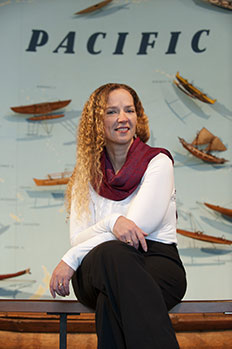 A University of Otago bioanthropologist is among an international group of scientists who have undertaken the first population genomic study of Aboriginal Australians.

Professor Lisa Matisoo-Smith of Otago’s Department of Anatomy and her international colleagues sequenced 83 modern Aboriginal Australian and 25 modern Papuan genomes – the Australians’ northern neighbours – covering most of the Australian continent and the New Guinea Highlands.

Their findings, published this week in the prestigious journal Nature, show that together the Aboriginal Australians and Papuans split from Europeans and Asians about 58,000 years ago.

They also found that Aboriginal Australians and Papuans later diverged around 37,000 years ago, long before the Sahul continent separated into Australia and New Guinea due to rising seas, some 10,000 years ago.

First author on the paper Assistant Professor Anna-Sapfo Malaspinas from the Centre for GeoGenetics at the Natural History Museum at the University of Copenhagen, the SIB Swiss Institute of Bioinformatics and the University of Bern says about the findings:

“The genetic diversity among Aboriginal Australians is amazing. Perhaps because the continent has been inhabited for such a long time we find that groups from southwestern desert Australia are more genetically different from groups of northeastern Australia than are for example Native Americans and Siberians, and this is within a single continent.”

It has been heavily debated whether anatomically modern humans left the African continent in one or several waves. Professor Matisoo-Smith says the authors found that Australians are mostly the result of a single wave out of Africa.

“This is an exciting study, not only in what it tells us about the origins, settlement process and history and subsequent diversification of the indigenous people of Sahul beginning around 50,000 years ago, but by the fact that it sets a standard for the collaboration of geneticists, archaeologists, linguists and Aboriginal elders and community representatives. It demonstrates how western science and traditional knowledge can be complementary and collaborative,” she says.