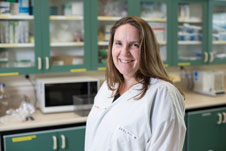 Bowel cancer accounts for 8.5 per cent of cancer-related deaths worldwide. Each year approximately 1,200 New Zealanders die as a result of bowel cancer – similar to breast and prostate cancer combined. The incidence of bowel cancer in New Zealand is one of the highest in the developed world, and survival rates are worse than in Australia.

Dr Kemp, who is a senior lecturer in the Department of Microbiology and Immunology, was announced as the winner of the award at the recent NZ Society for Oncology (NZSO) Annual Conference in Palmerston North. This award, which has an annual value of $30,000, provides a unique opportunity for New Zealand cancer research teams to up-skill an integral team member, so that the team can work together more effectively and improve research output.

Dr Kemp says: “The aim of our research is to deliver a direct clinical benefit to cancer patients in New Zealand, and this award brings us much closer to that goal. I am grateful to Roche and NZSO for their support of a true translational research team, and their willingness to encourage brand new ideas and technology.”

She explains that, recently, the immune response has been identified as a key predictive factor for bowel cancer survival, and the penetration or infiltration of immune cells is a more accurate predictor of disease-free survival than traditional tumour pathology-based methods.

“The mass cytometry technique represents a new approach to the study of immunology – examining the immune response from a “big picture” perspective, to find simultaneous changes in multiple interacting cell populations.

“We will look at which immune cells penetrate or infiltrate the tumour, and how their action is related to patient disease. We will also use this technology to study how T-cell populations can have an impact on patient outcome,” she explains.

Dr Kemp says the data analysis involved in her team’s research is complex, but there are experts internationally with skills in developing software analysis for individual projects. The Otago team aims to establish collaborations with world leaders in the field at Stanford University and Vanderbilt University in the United States.

The New Zealand Society for Oncology (NZSO) is the national professional body for career scientists and clinicians working in the field of cancer.
www.nzsoncology.org.nz

F. Hoffmann-La Roche & Co. was founded in 1896 in Basel, Switzerland and is the parent company of Roche Products (NZ) Ltd (Roche) which started operating in the country in 1973. The current Roche team of 30 dedicated employees has the primary goal of facilitating New Zealanders’ access to innovative medicines. As a leading developer of cancer medicines, Roche is proud of its collaboration with NZSO.
www.roche.co.nz