The outstanding achievements of two University of Otago researchers were recognised through the bestowing of prestigious national medals at last night’s 2016 Research Honours Dinner. The pair was among 16 New Zealand researchers honoured at the Royal Society of New Zealand event in Christchurch.

History researcher Professor Tony Ballantyne FRSNZ was awarded the Humanities Aronui Medal for innovative work of outstanding merit in the humanities and Professor Hamish Spencer FRSNZ of Zoology received the Callaghan Medal for his outstanding contribution to science communication and raising public awareness of the value of science to human progress. 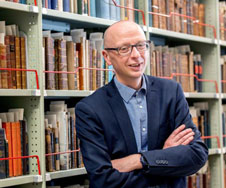 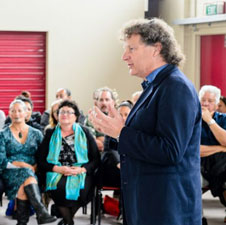 Professor Spencer was awarded the Callaghan Medal from the Royal Society of New Zealand for leading successful programmes of science communication and public participatory action with Uawa/Tolaga Bay and Ngai Tāmanuhiri.

The medal selection committee noted that these self-sustaining projects provide an exemplar for future public participatory partnerships in New Zealand.

Following visits from many AWC scientists, led by Professor Spencer as the Director, a concrete plan for the transformation of the ecological and community health of the wider Uawa catchment was developed. Called the Uawanui Sustainability Project (USP), it is a partnership of local Te Aitanga-a-Hauiti iwi with schools, local farmers and multinational forest companies and includes multi-generational involvement.

The USP is self-sustaining with a local Governance Board and the chair of the board, Victor Walker, says that numerous visits from Professor Spencer and AWC staff have “normalised a scientific approach across the community”, and that the project “has pervaded every nook and cranny of our small community”.

In addition to supporting AWC involvement with the project, Professor Spencer has given numerous talks in the region and led the 2015 Bioblitz in Tolaga Bay, which has given baseline information of the region’s flora and fauna but has also led to several practical conservation modules designed for local high-school students.

The second partnership Professor Spencer has led is located in the south of Poverty Bay with Ngai Tāmanuhiri. This small iwi sought more science to be in their community and many AWC researchers were invited to Muriwai Marae to talk about their work. In addition, Ngai Tāmanuhiri wanted on-the-ground science advice about improving their land and waterways. The project was set up to be self-sustaining and has received funding from MBIE’s Vision Mātauranga Fund to continue the work.

On receiving the Callaghan Medal, Professor Spencer said: “I am delighted at the award, but it is really a recognition for the work of the whole AWC team, as well as our iwi partners. That last word is crucial: the success of both the USP and the work with Ngai Tāmanuhiri is due primarily to the development of a genuine partnership between AWC scientists and the local communities.”

Professor Spencer is based in the Department of Zoology. His area of research is evolutionary theory at its applications, including population genetics and epigenetics. He is on the editorial board for journal Environmental Epigenetics and has received many honorary fellowships and visiting professor positions. He was made a Fellow of the Royal Society of New Zealand in 2009.