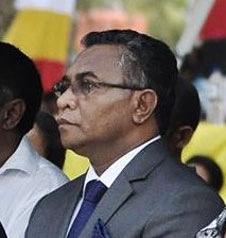 The Timor-Leste Prime Minister, who is a University of Otago alumnus, will visit the campus this week to explore possible collaborative projects.

His Excellency Dr Rui Maria de Araújo will also learn more about a range of public health initiatives during the University-hosted visit, on 2 March. He will be joined by a delegation which includes several of Timor-Leste’s senior ministers and the country’s ambassador to New Zealand, His Excellency Mr Christiano da Costa. Prime Minister Bill English announced the visit today from Parliament.

“The University of Otago sees it as a great privilege to be asked to host the delegation from Timor-Leste to share Otago’s knowledge and ideas on a range of public health initiatives, and the expertise of its widely respected academics. We would welcome discussion on collaborative health programmes and, on a more personal note, I am looking forward to recognising the contribution His Excellency Dr Araújo, an Otago graduate, has made as leader of his country,” says Vice-Chancellor Professor Harlene Hayne.

His MA thesis, entitled A Suitable Health System for East Timor from the Perspective of the East Timorese, was supervised by Otago Business School Dean and Pro-Vice-Chancellor of the Division of Commerce Professor Robin Gauld.

His Excellency’s medical training began in 1986 at the Sultan Agung Islamic University Faculty of Medicine in Indonesia. He later completed otolaryngology studies at the Medical Faculty of Udayana University, and graduated as a General Practitioner and Medical Doctor in 1994. On his return to Timor-Leste he spent four years working as a General Practitioner and House Surgeon at the Provincial Hospital in Dili and managing a tuberculosis program funded by Caritas Norway that was implemented in all Catholic clinics across Timor-Leste.

The Timor-Leste government website links this experience to His Excellency’s desire to study public health initiatives at Otago.

He became Timor-Leste’s health minister in the first post-independence government from 2002 to 2007. He then held various senior ministerial and advisory positions until being appointed Prime Minister in February 2015.