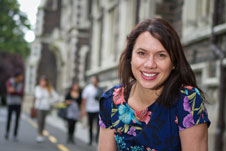 Latest research from the National Centre for Lifecourse Research (NCLR) suggests that graduating from university may not only change the individual lives of Māori and Pacific Peoples, but also positively impact on their families, communities and society in general.

The study found that Māori and Pacific Island graduates have similar rates of employment, similar incomes, and similar levels of voting to other New Zealand university graduates.

The findings are from the Graduate Longitudinal Study New Zealand (GLSNZ), an ongoing project that, over a 10-year period, will investigate the employment, health and social outcomes of more than 8700 graduates from all eight New Zealand universities.

Participants provided information in their final year of university study in 2011, and again in 2014 at two years post-graduation.

The research, published in the international journal Higher Education Research and Development, also found that Māori and Pacific Island university graduates are more likely to report helping friends, family and acquaintances at two years post-graduation compared to their peers.

“This also may result in substantial social benefits for graduates’ families and communities. Māori and Pacific Island students are under-represented within universities and our findings underscore the importance of equity in higher education for New Zealand’s social and economic development,” Dr Theodore says.

“The benefits of having a university education appear to go beyond the graduates and those people around them”, co-author Dr Mele Taumoepeau, says. “Two years after completing their degrees, Māori and Pacific Island university graduates were more likely to participate in community groups such as charitable organisations or political groups, and just as likely to vote as other New Zealand graduates.”

Despite the many benefits of having a university education, the researchers found that Māori and Pacific Island graduates were more likely to take out student loans, had more financial commitments, and reported worse financial strain (e.g., not having enough money to pay for accommodation) when compared to other New Zealand graduates, especially during their final year of study.

There were fewer financial differences between groups at two years post-graduation, although some differences remained including Pacific Island graduates reporting lower levels of assets.

Dr Theodore says there is a need to promote the benefits of gaining a university qualification to Māori and Pacific Island students and their families and reduce the barriers to these students attaining at the highest levels.