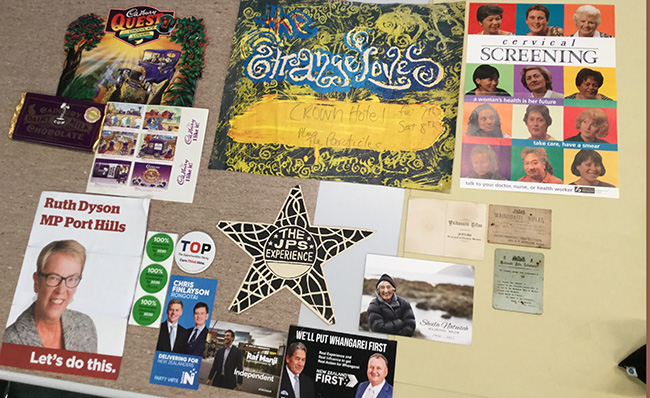 A collection of posters and ephemera donated from the public.

From Cadbury packaging and Dunedin music posters, to family histories and historic maps, the Hocken Collections continues to benefit from public generosity with a fantastic amount of donations received over the past year.

The public donates hundreds of items to the Hocken every year which enables it to remain relevant to the community, as well as ensure the material is safeguarded and available for present and future generations.

Hocken Music and AV Curator Amanda Mills says some of the "stand out’’ donations were live cassette recordings of 'Dunedin Sound’ bands.

These recordings, donated by Andy Ellis, feature bands from the 1980s and 1990s, while Dr Graeme Downes made a "substantial deposit" of live recordings of The Verlaines from 1981 to 1992.

Complementing this was a donation of 1980s and 1990s Dunedin music posters.

Other interesting items received include World War 1 diaries and letters; Home Circle, a lifestyle magazine that began publication in Oamaru in 1898; 1990s Cadbury chocolate wrappers; a 1913 poster featuring Captain Robert Falcon’s Scott’s last message; and about 70 maps largely of New Zealand and the Pacific from the late 1600s to early 1900s.

Donors will be thanked at an event on Saturday, 9 December. While there, they will also have the opportunity to view the ‘CONTINUITY & CHANGE: The Hocken’s art across time’ exhibition, currently open to the public until 27 January 2018.