The first Brontë manuscript identified in New Zealand has been restored to its place in literary history thanks to a University of Otago researcher.

The fragment of Branwell Brontë’s work was hiding in plain sight, misfiled as a letter, in the Heritage Collections of the Dunedin Public Library.

Coincidentally, the announcement of the previously unknown manuscript in Branwell’s hand occurred in the same year of the bicentenary of the writer’s birth. Branwell Brontë was born on 26 June 1817, and conferences and a special exhibition devoted to his life and work have been held in the United Kingdom this year. 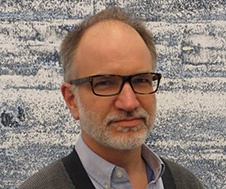 The lesser-known brother of the famous novelists, Charlotte, Anne and Emily, Branwell is today remembered for his tragic death to alcoholism and for painting the only group portrait of his novelist sisters, but he was in fact the first Brontë sibling to see work in print.

Dr Thomas McLean, of the University of Otago Department of English and Linguistics, and Dr Grace Moore, of the University of Melbourne’s ARC Centre of Excellence for the History of Emotions, researched Branwell’s life and work so they could properly explain the significance of the manuscript.

Their findings have just appeared in the Oxford University Press journal Notes & Queries.

They discovered the Dunedin fragment provides the ending for a story written by Branwell in 1837. 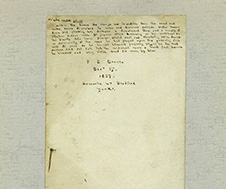 The Bronte manuscript mistaken for a letter.

The pair pieced together Branwell’s microscopic handwriting, sometimes word-by-word, sometimes letter-by-letter, and were able to place the fragment at the end of a scene in an inn, identified as part IV (i) of Angria and the Angrians.

Dr McLean visited the Brontë Parsonage Museum in Haworth, UK, in August this year and examined Branwell’s writing journal from which the page was taken.

"I could see exactly where our page fit. The fragment provides the finishing touches to the story,’’ he says.

They believe the piece may have become separated from the rest of the story because it is written on a slightly different sized piece of paper to the rest, as though it was an afterthought; it also bears a date eight weeks later than the chapter it concludes.

The rest of the story, which has already been published, survives at the Brontë Parsonage Museum in Haworth, Yorkshire.

It is one of a collection of stories about the imaginary land of Angria that Branwell and Charlotte wrote about in their youth. 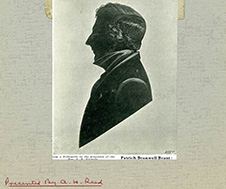 The second portion of the manuscript.

"Branwell would write one story, and then Charlotte would write the next. It was a kind of practice ground for the siblings, and it surely helped Charlotte refine the storytelling skills that would come together so remarkably in Jane Eyre.

"When Jane Eyre was published in 1847, its readers were astonished that a first novel could be so good. But the truth is, Charlotte and her siblings had been writing for each other for almost two decades before Jane Eyre appeared.

"The Dunedin fragment is, quite literally, a page from that remarkable history,’’ Dr McLean says.

The fragment is part of the Alfred and Isabel Reed Collection of rare books and manuscripts held in the Heritage Collections of the library, with records showing it was purchased in 1928.

The collection is the work of businessman and publisher Alfred H. Reed, who died in 1975, and includes work by Charles Dickens, Walt Whitman, Elizabeth Gaskell and Dante Gabriel Rosetti.

Dr McLean says the collection also includes a clipped signature of the Reverend Patrick Brontë, Branwell’s father, though its provenance is uncertain. The father’s signature took pride of place in one of Reed’s ornately decorated autograph albums, while the son’s manuscript languished in a folder, incorrectly catalogued as a letter.

The manuscript was displayed earlier this year in a University of Otago library exhibition, “Keeping it in the Family,” which examined famous British literary families.

It will remain at the Dunedin Public Library, though future publications of the story will need to include the Dunedin page.

"It’s incomplete without it. Any scholar working on Brontë juvenilia or on Branwell’s writings will want to know about it.’’

The fragment is also an "encouragement for more research’’, Dr McLean says. "There are other missing pages in the Brontë archives. So who knows what else is out there?’’