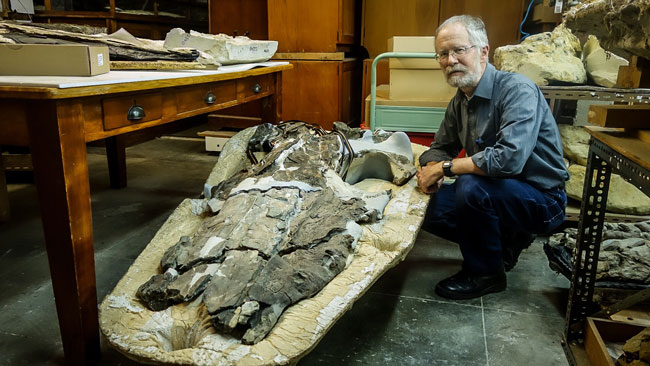 Professor Ewan Fordyce and the 34 million-year-old whale fossil he discovered from Antarctica. Credit: University of Otago. 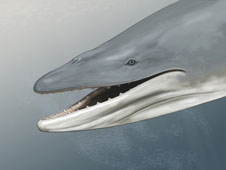 A University of Otago palaeontologist’s discovery of an ancient fossil whale that swam the Antarctica seas 34 million years ago has paved the way for new knowledge about the evolution of baleen whales.

Professor Ewan Fordyce, from the University’s Department of Geology, discovered part of the skull of what is believed to be the second-oldest baleen whale ever found while on an expedition in Antarctica in 1987.

Based on detailed analysis of the ancient fossil, he and colleague Dr Felix Marx, a former University of Otago PhD student now based at the Royal Belgian Institute of Natural Sciences, have pieced together evidence suggesting that early whales did not have baleen at all. Their mouths were equipped instead with well-developed gums and teeth, which they apparently used to bite large prey. 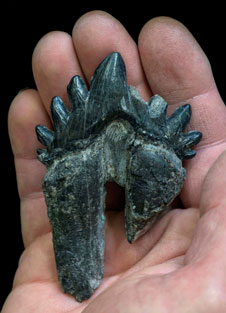 It was this very fossil tooth which Professor Ewan Fordyce stumbled across in Antarctica years ago which led him to the discovery of an ancient fossil whale. Credit: University of Otago.

A research paper based on their findings has been published today in the journal Current Biology.

“Llanocetus denticrenatus is an ancient relative of our modern giants, like humpback and blue whales; unlike them however, it had well-developed teeth used to slice prey,” Dr Marx says.

Professor Fordyce explains that until recently, it was thought that filter feeding first emerged when whales still had functioning teeth, but Llanocetus shows this was not the case.

Like modern whales, Llanocetus had distinctive grooves on the roof of its mouth, the researchers explain, which usually contain blood vessels that supply the baleen. In Llanocetus however, those grooves cluster around tooth sockets, where baleen would have been useless and at risk of being crushed.

“Instead of a filter, it seems that Llanocetus simply had large gums and, judging from the way its teeth are worn, mainly fed by biting large prey,” Dr Marx says.

The findings suggest that large gums in whales like Llanocetus gradually became more complex over evolutionary time and, ultimately, gave rise to baleen. That transition probably happened as the teeth were becoming lost and whales had switched from biting to sucking in small prey – as many whales and dolphins do now.

“From studying other specimens, we suspected the idea that early whales had both teeth and baleen was probably wrong. Only Llanocetus however, really illustrates this point, and it was both surprising and lucky to find such clear evidence in such an ancient specimen,” Dr Marx says.

Professor Fordyce was indeed very lucky to stumble across the fossil after bad weather on an expedition in the Antarctica in 1987 resulted in him taking a short cut back to camp up a small gully and literally stumbling across the fossil.

“I realised that it was something big – a major find of a large whale,” he recalls.

The find was indeed momentous as the skull he eventually recovered proved to match an earlier discovery by American researchers in the Antarctica in the mid 1970s, of part of a jaw with teeth that was in fact part of the skull of the very same individual whale.

But Professor Fordyce says his find would never have been discovered had it not been for the researchers from the United States who invited him on the expedition and later assisted in providing funding for the preparatory work.

Relying on different pockets of funding, he estimates it took three years of full-time work spread over decades to prepare the fossil as the job is “technically difficult”.

“Imagine that you have an eggshell to extract from a block of concrete and you’re trying not to damage the eggshell by getting rid of the concrete.”

While the giants of our modern ocean may seem gentle, they are active predators like their ancestors. Professor Fordyce says Llanocetus was large at about eight metres long and a ferocious predator.

“We suspect that climate was quite influential on the history of whales, especially the shift from tropical to cooler temperatures and when it was cooler there was a change in nutrition cycles and food that may have been some sort of trigger for the evolution of the big whales.”

The original specimen will be transferred from the University of Otago’s Department of Geology to the National Museum of Natural History (Smithsonian Institution) in the United States. It will go alongside the original fossil piece of jaw found by the United States researchers.

This research was supported by a Marie Sklodowska-Curie Global Postdoctoral fellowship, the US NSF, the Kellogg fund of the National Museum of Natural History and the University of Otago.