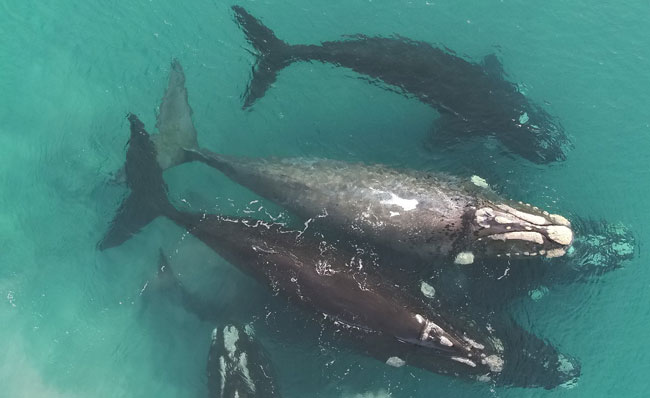 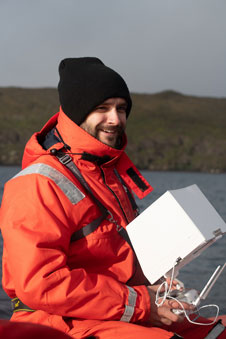 A University of Otago research team led by Professor Steve Dawson and Dr Will Rayment, have recently returned from a month-long expedition to the sub-Antarctic Auckland Islands where they have been collecting data on a recovering population of southern right whales.

The main focus of the project was collecting high quality photographs of whales from above using adapted unmanned aerial vehicles (UAVs).

“Until recently aerial photographic data have been gathered using small aeroplanes or helicopters – really expensive things to run. UAVs now allow us to collect lots of high quality photographs of these animals very cost effectively, in remote habitats and in a non-invasive way,” says Dr Rayment.

The UAVs offer a whole new perspective on the whales while in the field; one of the most striking sights is the presence of calves that are almost completely white. Their colouration making the task of recording them easier for Marine Science PhD student and UAV operator/pilot David Johnston.

“They really stand out from the surface. They look almost luminous, making them really easy to track,” Mr Johnston says.

This pigmentation pattern occurs in around three to four percent of calves, nearly always males, and is caused by the expression of a recessive gene different to that which causes the typical black colour. The white pigmentation usually darkens as the animal grows older, developing into a mottled grey colouration. 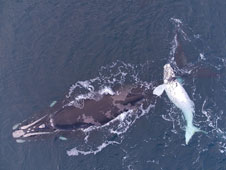 Some whales are also born black with strikingly bright white patches, usually on their backs, sides or bellies, known as “blazes”. These will often remain with the whale into adulthood and provide another way of distinguishing individual whales from one another.

Despite the increased conspicuousness of these whales, they don’t seem to be at a disadvantage because of it.

“These different colour patterns don’t seem to impact the animal’s health or fitness – white calves have similar chances of surviving than black calves; while the reproductive success of white-blazed mothers are similar to those that are all black,” says Mr Johnston.

The imagery the team have collected will also be used to measure the whales’ condition (fatness) via photogrammetry techniques. Using the high quality photographs from directly above the whales, the researchers will run a University of Otago designed graphical user interface and statistical program to measure length and width of the animals and allow a tracking of body shape over time.

“With this data we can get an indication of the individual whale’s progress plus the productivity of the feeding grounds these whales access, and compare results to those in the northern hemisphere where populations of North Atlantic and North Pacific right whales have been struggling,” adds Mr Johnston.

Southern right whales were once widespread throughout much of the southern hemisphere; the New Zealand population once numbering more than 30,000 individuals. Over a relatively short space of time during the 19th century however commercial whaling saw this population reduce to fewer than 100 individuals.

Since 1937, when commercial hunting for right whales was banned, the population has been bouncing back – the most recent estimate is over 2,000 individuals and increasing at around five to seven percent per year.

“It’s one of the few instances around in conservation in which a species has managed to hang on and begin to slowly claw its way back from the brink. It’s why we’re seeing more and more right whales turning up around mainland New Zealand in recent years,” Dr Rayment says.

The latest expedition was the last of a three-year project funded by the University of Otago, the New Zealand Whale and Dolphin Trust and the New Zealand Antarctic Research Institute.

Please note: DOC regulations prevent the flying of UAVs over marine mammals unless a permit is obtained (University of Otago Marine Science personnel have such a permit for research-related flight).