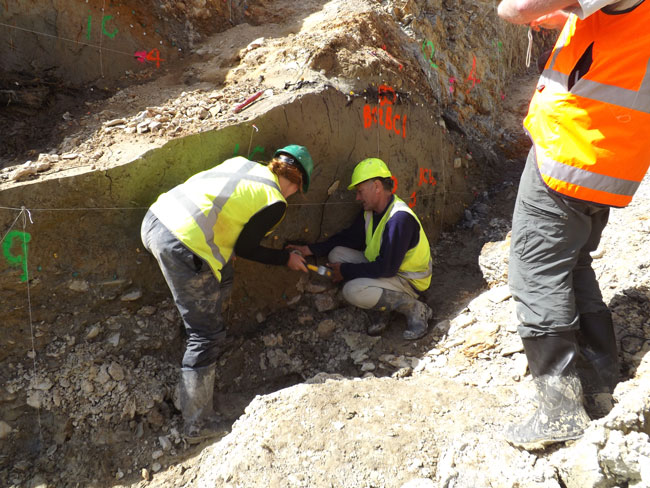 Professor Stirling with his team taking samples from the Akatore fault near Dunedin.

Otago is a region of ‘quiet’ but important faults and will be the first researched in a project led by Professor Mark Stirling of the Department of Geology.

Faults most likely to affect Dunedin that have not previously been studied, such as the Hyde Fault and another that created the Hawkdun Range, will be the focus of this new research.

The potential for earthquakes to occur in what are considered “low seismicity” or low earthquake hazard zones is the subject of a research project that has just received $68,000 in funding from the Earthquake Commission.

“People in Dunedin focus on the Alpine Fault being the worst case earthquake source for the city, but the more local faults like the Akatore should be of much greater concern,” says Professor Stirling, Chair of Earthquake Science at the University of Otago.

Professor Stirling says that his earlier work on the Akatore Fault near Dunedin showed that there are periods of quiet with nothing happening for at least 100,000 years, and then suddenly (in earthquake time terms) three earthquakes in 10,000 years, two of those in the past 1300 years.

“These might be earthquakes that only come along over periods of thousands, or even tens of thousands of years. But when they do, they can be quite damaging. And Dunedin, with its beautiful old buildings and unreinforced masonry could be more at risk than Dunedinites think,” he says.

The team will start work by looking at faults most likely to affect Dunedin that have not previously been studied, such as the Hyde Fault which created the Rock and Pillar Range, and would greatly affect Dunedin if it ruptured again.

“Some of these faults have been quiet for a long time, and some have been really active after long periods of calm. It’s the quiet ones you need to watch, the wisdom goes, and that applies to earthquakes too,” says Professor Stirling.

“We’ll be digging trenches and looking at when they have ruptured and how big the earthquake most likely was. That will give us an indication of what hazard it might pose for the future.

“The biggest danger in an area like Otago is that we don’t think there is going to be an earthquake on one of these “quiet” faults, so we don’t prepare as much as we would in somewhere like Wellington.”

“Dunedin is generally considered low earthquake risk, but in 1974 there was a Magnitude 5 earthquake offshore and EQC received 3000 claims from homeowners.

“This research will help paint a picture of how Dunedin and Otago could be affected by a future earthquake. Data from the research will also feed into the National Seismic Hazard Model which in turn is used to develop the standards for building strength in different parts of the country.”

“People focus on places where there have been recent earthquakes, but there might not have been one there for tens of thousands of years. Chances are that there might be another long period of quiet. Ruptures on “quiet” faults are often really energetic because they have been sitting around for a long time. Like a rusty nut which takes a lot of strength to get it to budge when it finally does it’s with a big bang.

“And then there are other faults like the one that created the Hawkduns. Nothing has happened there for about a million years, and no one knows whether they will ever get active again.”

Professor Stirling says this research project links in with other research underway looking at the basis of how New Zealand’s earthquake hazard is calculated.

“There has been a general idea that faults build up over a cycle, then rupture to release energy and then start again. This has given the idea of an “average” time period on a fault for an earthquake.

“The question we’re asking, and this is where it’s very useful to look at faults in “low seismicity” areas, is does this averaging make sense, or could it actually be common for faults to be quiet for long periods of time and then generate clusters of earthquakes?

“You need a lot of data going back a long time to answer that kind of question, so all the research we’re doing in Otago will contribute to that larger question as well,” says Professor Stirling.