Leslie Van Gelder, a well-known American-born archeologist has been working with Dr Harald Schwefel, and other physicists at Otago University to develop a lamp that mimics the flickering torch light that paleolithic cave artists worked by many thousands of years ago. The lamps will help Leslie and other archeologists reveal intimate details of these ancient people.

The collaboration brings together quantum physicists and archeologists with indigenous Australian land-owners, deer stalkers, artists, ancient DNA specialists, university students and a product designer. The story shows the unexpected ways cutting edge science research can enrich cultural understanding and heritage. It speaks to a willingness and generosity in the New Zealand science community to try something different and help each other out. 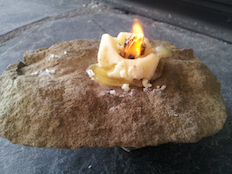 Tens of thousands of years ago ancient people of Europe and Australia trekked deep into caves by torchlight creating images on the walls of horses, bison, reindeer and stencil outlines of their own hands. In the flickering firelight of their ancient lamps, the figures would appear to move. The shadows on the curved cave walls gave them an illusion of volume and life and the colours appeared inky-rich and deep. This was how the ancient artists would have seen their work. But in the past few decades open flames have been banned in heritage cave sights and the LED lights that replaced them have taken away much of the mystery.

“The flat grey and white light of the torches made with LED’s produce an almost clinical light and rob the animals of their warm colors and their shadows,” Leslie says.

It was a conversation with a cave guide in Europe in 2016 that gave Leslie the idea for creating the new lamps. Not only could this give a more authentic experience of the caves. It would also help to answer important research questions.

As a researcher I have been drawn to questions of light for the last decade,” Leslie says. “These new lamps will help us to explore questions of how people moved through the caves and drew the on the walls... Some of the images are found high up in hard to reach places. The artists would have had to climb five metres up a wall or stalactite to reach them, which would require both hands. So someone else must have held the light. I have a soft spot for the people in the shadows who might not have made the drawings themselves but allowed someone else to by holding their light.”

Leslie returned to Glenorchy in New Zealand where she lives, with a mission to find a more authentic lighting solution. The first step was to try to create an authentic copy of the ancient lamps to work out what qualities of the light the lamps needed to mimic. She sourced animal fat from local deerstalkers and a butcher to mimic the reindeer and auroch tallow used in ancient lamps. She worked with a local sculptor to fashion a stone base using primitive tools.

To create a modern equivalent she needed some physicists. This is where the Dodd-Walls Centre comes in. This national centre of collaborative research brings together scientists across the country doing world-leading research in light and quantum science. Leslie discovered the Director of the Dodd-Walls Centre, Professor David Hutchinson while searching the University of Otago website.

“He looked approachable and was leading an interdisciplinary centre that focuses on light,” says Leslie. “So I wrote to him. He replied straight away and said he could help. I wasn’t expecting it to be that easy!”

Professor Hutchinson put Leslie in touch with Dr Schwefel, a Principal Investigator with the Dodd-Walls Centre, also based at the University of Otago. In his core research Dr Schwefel develops world-leading components for incredibly powerful quantum computers. He recently published a paper in the prestigious scientific journal Nature announcing his invention of a device that could revolutionise internet efficiency and speed. So this project came out of left field. 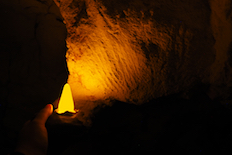 “It was really great to see how we could use our knowledge of light and its spectral properties to provide help for the archeology community” says Dr Schwefel. “Once we identified what we wanted to achieve in terms of the flickering pattern and spectrum, then it was pretty straight-forward to devise a candle-like structure that had the correct flickering pattern.”

“They asked me for a Christmas wish list of all the things I wanted the lamp to do,” Leslie explains. “It’s incredibly hard to find funding in the archaeology community,” Leslie says. “This was an amazing gift to have their support.”

In the summer of 2018-19, Timothy worked with Dr Schwefel and Luke Taylor to produce six hand held lamps that Leslie could take as prototypes to a cave in Australia where she was working in March.

“Working to my ‘wish list’ for color, intensity, and flicker, their team did an amazing job and a week before I left, a suitcase arrived for me in Glenorchy that had 6 beautiful lamps. The glass for them had been hand blown by the chemistry department’s glassblower, the bodies of each lamp mimicked stone from different parts of the world and the mechanism were three LED lights colored to the sodium line they had discovered in their light spectrum analysis. Luke and Timothy had done a series of experiments with wind and wick length to produce a series of potential flicker patterns so the lamps in the end had 13 different intensity and flicker pattern that I could change with just the flick of a button. Magic!”

There was an almost audible silence when the team of scientists, archeologists and traditional indigenous land owners entered the cave in Australia that Leslie had lit using the new lamps.

“It was a very moving experience to see the cave in the flickering warm light of the ‘paleo-lamps,” Leslie says.

This is just the beginning of the collaboration. Having discovered ancient fire-sticks in the Australian cave, Leslie will work with Harald and the team alongside the local Aboriginal community to develop a new lamp to mimic its light.

Even though the project was tangent to Harald’s core focus on quantum computing and photonics, it provided an excellent opportunity to contribute to a new field. It also gave the students valuable experience of developing a product and getting it to market with a deadline.

According to Leslie the archeology community have been impressed and inspired by the project. presented the story at a specialist conference on rock art.

“I presented the story at a rock art conference recently,” She says. “Some archeologists told me it restored their faith in archeology. There is a real respect and interest in the perspective from another field like physics.”

Next spring Leslie will be returning to Europe to continue her cave research there. She will be taking with her a box of the new lamps as a gift from the Dodd-Walls Centre.

“I look forward to seeing what we might be able to see for the first time in the shadows and flickering lights of our lamps,” Leslie says.