A University of Otago scientist is concerned there could be a considerable number of Kiwis unaware they have ALK positive lung cancer as Pharmac is looking to fund Alecensa, a drug to treat this particular cancer. 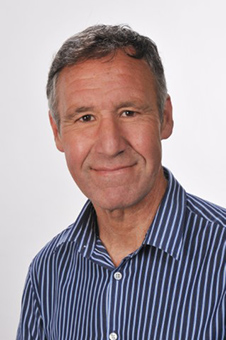 University of Otago pharmacologist John Ashton suffers from the cancer himself and after being diagnosed with advanced lung cancer in 2013 says he is lucky to be alive after testing for ALK positive and receiving targeted drug therapy since 2014.

“I call myself one of the lucky unlucky,” Associate Professor Ashton from the Department of Pharmacology and Toxicology explains.

Having access to Crizotinib, the first generation drug preceding Alecensa for positive advanced non-small cell lung cancer as part of a trial, his health improved. However, after cancer spread to his brain he began the third generation drug Alecensa just weeks’ ago and a recent MRI scan shows the brain tumour has already shrunk.

“That’s why I want to let people know about ALK positive lung cancer and the drug treatment available for it because it can save lives and at least give people quality time with their family and loved ones.

“When I was first diagnosed I had an explosive cough with blood. Within 9-10 days of taking the targeted medication that cough had stopped and within the month I was back to running. That’s how dramatic it was.”

ALK positive lung cancer is a lung cancer caused by a gene mutation and is strongly associated with a history of never smoking. In New Zealand, lung cancer is one of the deadliest diseases with 1800 people dying annually, 80 per cent of whom are long-term smokers.

About 4 to 5 per cent of people with lung cancer are ALK positive with sufferers typically aged in their 30s or 40s. It is more common in women and in Māori (8 per cent), Pacific Islanders (10 per cent) and Asians (22 per cent).

Associate Professor Ashton runs a closed Facebook group for ALK positive sufferers and says there are about 20 members but the research suggests there must be many more out there with the cancer.

“What we know from the research is that there should be about 100 cases annually, so there are several hundred people out there currently who have it and don’t know it; but they would have a much better outlook if they did.”

In Associate Professor Ashton’s case, doctors considered asthma when he initially presented with a chronic cough, then angina after he began to get chest pain when running. However, an x-ray just prior to his 48th birthday in 2013 showed the cancer was advanced and had spread through both lungs. Doctors did not believe it at first as he did not fit the stereotype for lung cancer having never smoked, being young, fit and seemingly otherwise healthy.

Initially treated with chemotherapy, there was no impact and it was only months later when tested positive for the ALK mutation that he began targeted drug therapy and his health improved.

Pharmac announced earlier this month that it plans to fund Alecensa from December 1 this year, pending public feedback. All feedback received this month will be considered by Pharmac’s board prior to making the final decision. Currently, Alecensa costs about $6500 a month.

Associate Professor Ashton says there has been a long-standing fight from advocacy groups and New Zealanders dying of cancer campaigning for the drug to be funded for the lives it could extend and save. He is hopeful Pharmac will “make the right decision”.

“Being a pharmacologist, being a patient myself and living with it, I want to make people aware of the cancer and what treatment is available.”

For further information or to arrange an interview with Associate Professor Ashton, contact: