Director of The Dunedin Study recognised with Distinguished Research Medal 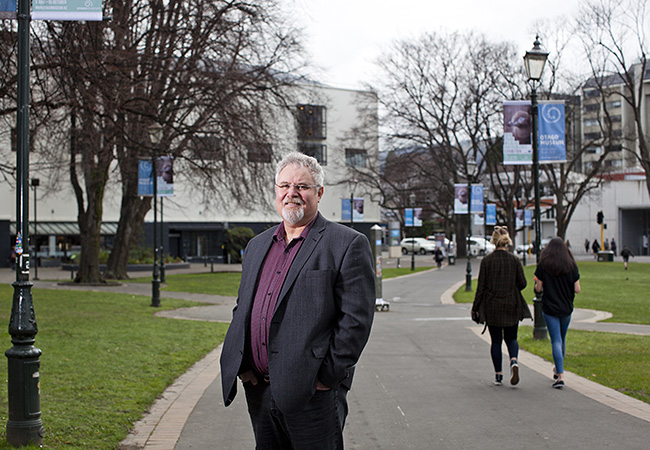 With an academic career starting at Otago with undergraduate study beginning in 1981, Professor Poulton has become well recognised for his leadership of The Dunedin Study over the past 25 years.

Among other things this has involved constant scanning of the research horizon to ensure the Study remains at the cutting edge, including a more recent emphasis on maximising the translational value of the Study’s research findings.

Professor Poulton’s research, which ranges from the prediction of adult well-being from childhood measures of socioeconomic disadvantage and self-control, to the effects of psychosocial adversity on illness and the process of aging, to those of early cannabis use on cognitive decline, has had compelling implications across practice and policy.

His research and expertise has been the subject of 270 journal articles, 24 chapters, attracted more than 70,000 citations, and he has recently clocked a century of keynote presentations.

On the wall above Professor Poulton’s desk is a poster of cricketer Brendon McCullum taken upon scoring the first-ever triple century by a New Zealand batsman.

“When I look at that photo, for me it captures the power of mind over his natural instincts, strength of will, character and perseverance, and managing the uncomfortable,” he says.

All these traits resonate with Professor Poulton’s own work ethos, but he is also a big believer in the simplicity of working hard and maintaining a clear focus on the main game, whatever that might be.

“The outcome may be special, but the process of getting there is normally simple, old- fashioned hard yakka,” he says.

In 2017, Professor Poulton was appointed as a Companion of Order of Merit (CNZM) for services to health research and science, recognising his impact on policy and practice achieved through various roles including as a part-time chief science adviser to the Ministry of Social Development, as well as to the Minister for Child Poverty Reduction Minister the Rt Hon Jacinda Ardern.

His impact on the global stage is shown through work published in internationally recognised journals such as Science and The Lancet, including a paper in the Proceedings of the National Academy of Sciences which was selected as one of most important scientific discoveries of 2016.

“It’s really important to me to apply the knowledge we are gaining through The Dunedin Study, and translate it into something that matters for people’s lives by informing and supporting change in either policy or practice.”

The Dunedin Study has recently completed Phase 45, and its 94% retention rate of the 1,037 participants who joined the study at birth in 1972 and 1973 largely reflects its founding value of authentic trust that Professor Poulton stands strongly by.

Professor Poulton’s first exposure to The Dunedin Study was in 1985 at Phase 13 when employed as a research assistant and interviewer, and he has met virtually every study member since joining the Study permanently in 1995.

“What we are now seeing more clearly than ever is differences in people’s life trajectories, but the exact nature of what explains these differences is only now being properly investigated.

“Much of the research we undertake explores the links between our younger selves and later life trajectories, and I think I am the instantiation of the idea that it’s possible to connect the pieces between childhood and adulthood.

“I was fortunate to have had the nurturing upbringing which involved a mum with compassion and a great-grandmother with angel-like qualities,” he reflects.

The University of Otago Distinguished Research Medal award recognises outstanding performance of researchers, whether in scholarly achievement or the discovery and dissemination of new knowledge.

“I’ve been comfortable with holding myself to account according to my own internal standards, but receiving this award adds some fuel to the tank, and provides encouragement to do more of what I’m doing.

“My goal is to make sure as much of what we do ends up helping people so this award says righto, get on with it and make the most of the opportunities ahead.”