Sometimes things happen that are so tragic, so traumatic, there is no way to forget them.

For Nashika Sharma, a University of Otago Master of Public Health graduate, becoming a medical doctor was supposed to be a chance to stop such things happening to other people.

Tragically, such an event ended up happening to her.

Dr Sharma was born at the Colonial War Memorial Hospital (CWM) in Suva to a doctor father and a nurse mother. The youngest of three children, she studied medicine at Fiji National University – her final year of study being 2016. During that year she did a rural placement at Sigatoka Sub-Divisional Hospital. 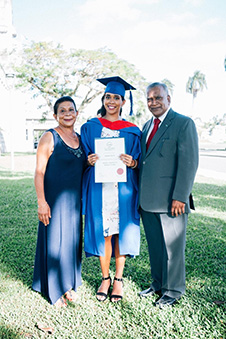 Nashika, on her graduation day, with her mother and father.

As part of that placement she had to complete a small research project. The rural hospital had records of a considerable number of deliberate self-harm admissions of young women. The most common method of self-harm was the ingesting of chemical poisons, including a common, cheap and easily available herbicide called Paraquat.

Paraquat’s association with harmful effects for humans led to it being banned in the European Union in 2007, but it is still widely used around the world, including in New Zealand, Australia and the United States.

The following year she was working as a junior doctor in the Emergency Department at CWM hospital. She had just finished a long night shift and was about to get some rest when she was informed a new patient had been brought in to the ED.

It was Dr Sharma’s mother. She had been diagnosed with severe depression 10 years earlier and had spent the last decade battling the condition. On this particular night she had consumed a lethal dose of Paraquat.

“But all I could do was sit back and watch the Paraquat take its course. And it took 48 hours until we lost mum. And all we could do was stand beside her and pray for her. There was nothing else we could do.”

Her mother died; another Fijian woman who had used Paraquat to self-harm.

“Losing her was a very big thing. She was a very big part of me. That was a very big blow. It shifted everything, every perspective on life for me. It raised a lot of questions about whether I wanted to stay in clinical medicine or have a career change.

“Because seeing people die on a daily basis, walking past the ward where mum was, everything was just a constant reminder of those 48 hours when mum was admitted.”

She talked at length to her father about what to do, how to carry on. The idea of “public health” came up; where global changes could be made, where Dr Sharma could use her personal story to help make those changes in Fiji, rather than just wait in a hospital for further patients to be admitted in the same circumstances as her mum’s.

She researched public health courses with international clout, renown and reputation. That led her to Dunedin in 2018, and the University of Otago’s Postgraduate Diploma in Public Health.

One of her papers, led by Professor Sarah Derrett of the University’s Department of Preventive and Social Medicine, was on public policy.

“That paper made me realise, ‘hey, you don’t have to sit with this grief, you can actually do something to make sure other people, other families don’t have to go through this’.”
It inspired her to believe change was possible. She returned to Fiji and convinced her dad – a former Minister of Health who had always loved to write but had stopped doing so after his wife’s death – to help her lobby for change.

She showed him what she had learned at Otago; how to make submissions, how to attempt to make meaningful change.

They researched, they gathered data, they used her 2016 study and broadened it. And they found that the World Health Organization strongly recommended restricting access to means of self-harm for suicide prevention.

“And we found that the majority of people’s suicide attempts were from consuming Paraquat. But Paraquat was still being sold in shops in Fiji at $8.50 a bottle.”

They found that in countries where Paraquat had been removed crop yield wasn’t affected, but suicide attempts reduced by 50 per cent.

This became the basis for their report, and their drive to “move into action to restrict sales”.

Soon they had a collection of interested parties, including medical personnel, allied health professionals, private citizens and families of victims.

They set up an online petition that initially garnered some 2000 signatures.

“This sort of set up a domino effect. The SPCA then set up a petition too, because animal poisoning is another problem with Paraquat – robbers poisoning pet dogs, that sort of thing. So we all started making noise, to get heard.”

In October, the Ministry of Agriculture announced that by 2020 Paraquat will be banned in Fiji.

“It’s just about getting your voice heard and not just dealing with the grief on your own. So this is what I did. And my hope is no child, no family should lose someone to deliberate self-harm.”

Dr Sharma says she has learned there is “only so much you can do as a clinician”. Her public health knowledge – she is about to graduate with a Master of Public Health – has taught her that some things need to be achieved from a higher policy level than what doctors can traditionally achieve.

It also strengthened her writing and critical analysis skills and gave her “a really broad understanding of public health matters around the world and in New Zealand, and how to address them”.

“It’s challenging, but I’ve enjoyed it.”

Professor Sarah Derrett says knowledge about public policy, and developing the skills to advocate for healthy communities, are core components of the postgraduate public health programmes at Otago.

“Nashika and her family’s experience is deeply moving. Nashika and her father’s advocacy for change will save the lives of so many others in Fiji; this is public health doing what it does best, and it is a privilege to learn that our university has played a small role in helping Nashika take such important action”, Professor Derrett says.

Dr Sharma says the course gave her the practical tools she needed to process her grief.

“Everyone says that time will heal all my wounds. But over the last two years I’ve continued to find myself struggling and still grieving the loss of my mother. Not a single day has gone by where I haven’t wished for her to still be around.

“When you suffer such a tragedy in your life, sitting and waiting for time to heal your wounds is just impossible. I believe you need to stand up and take action.

“Although I’ll never have the opportunity to get my mum back, I hope that no other child or family out there has to go through what me and my family went through. That 48 hours is something I won’t ever forget.”

With her Master of Public Health complete Dr Sharma says she would like to return to Fiji, to serve the people there and to perhaps help strengthen the public health system through health policy.

She says her dad is happy to see her “coming out the other end” of her ordeal.

“And I also hope mum is very proud of me.” 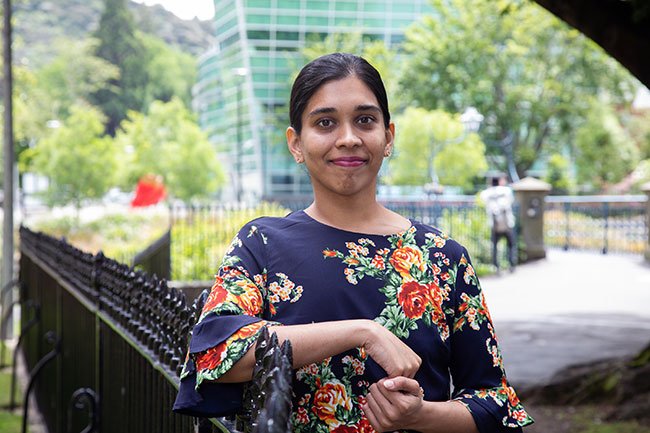