A leading University of Otago economist has crunched the figures for New Zealand and its major trading partners’ growth rates for the first quarter of 2020, revealing some startling results. 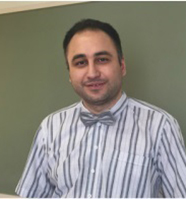 Senior Lecturer Dr Murat Ungor has used recent data releases from the Organisation for Economic Co-operation and Development’s Quarterly National Accounts to analyse the negative impact of the COVID-19 pandemic on the global economy.

Not only did New Zealand record its biggest quarterly fall since 1991, but one of its major trading partners, China, recorded a “historic slump”, he says.

The International Monetary Fund’s World Economic Outlook Update for June projects the global economy will shrink by 4.9 per cent this year.

In terms of responding to the pandemic, NZ was ranked at the top of the list in a report by the Economist Intelligence Unit ranking 21 OECD countries, with an overall rating of 3.67 on a scale of one to four.

The only mark taken off came on provision of non COVID-19 healthcare.

“Given the relatively successful position of NZ in terms of the response to the pandemic, a natural question arises regarding the initial and long-term economic effects of COVID-19 on its economic activity,” Dr Ungor says.

For the March quarter, New Zealand saw the largest quarterly fall in gross domestic product since the first quarter of 1991, he says.

Figure 1 below shows the quarterly growth rates of GDP for NZ between the third quarter of 1987 and the first quarter of 2020. 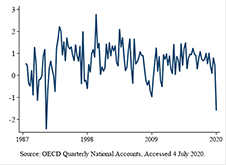 The last time NZ had negative quarterly growth rate was the last quarter of 2010, when it contracted by 0.5 per cent.

It takes at least two consecutive quarters of negative growth for a country to enter a recession, Dr Ungor says.

“It is very likely NZ will record another negative growth in the June quarter of 2020.

The quarterly figures also show China, one of NZ’s four main trading partners, has recorded a “historic slump”, as its GDP fell 9.8 per cent in the March quarter, Dr Ungor says.

In comparison, Australia’s GDP stayed resilient dropping 0.3 per cent, Japan fell by 0.6 per cent, and the US fell by 1.3 per cent.

“While China’s GDP plunged further during the first quarter of 2020 than during the 2009 global financial crisis, the situation is the reverse for Australia, Japan, New Zealand, and the United States,” Dr Ungor says.

Table 1 below, shows the year-on-year growth rates for NZ and its major trading partners during the GFC and the COVID-19 pandemic.

Studying the year-on-year growth rates could explain the historical importance of the decline in the Chinese GDP, he says.

Year-on-year data has been the preferred calculation for the National Bureau of Statistics of China (NBS), which only started to record quarterly growth rates in the first quarter of 2011.

In 1978, China was one of the world’s poorest countries and barely engaged in the global economy, while today it is the world’s second largest economy after the US.

When the GFC swept over the global economic activity a decade ago, manufacturing industries and business of export agents got hit the most among the Chinese enterprises.

However, China’s domestic market was big enough for national brands to continue their businesses, and this helped some national companies to survive during the GFC.

Economic activity contracted significantly in China in the first quarter of 2020, as virus containment measures saw hundreds of thousands of workers stranded far from factories.

China has emerged as the “manufacturing warehouse” of our planet, but the factory closures and reduced ability to export has created this dire picture for the first quarter, Dr Ungor says.

“Having said that, there may be a rebounding.”

“For example, as the World Trade Organisation stated on 22 June, car sales in China were up 5 per cent year-on-year in May after falling 79 per cent in February.”

The upcoming days will bring new data for different economic sectors, and new and updated data at the sectoral level will provide more light to understand the size of the economic contraction, he says.

“Are we going to see similar growth rates for the rest of 2020? This is something to watch closely.”