Canine Levi is sniffing out bowel cancer in saline 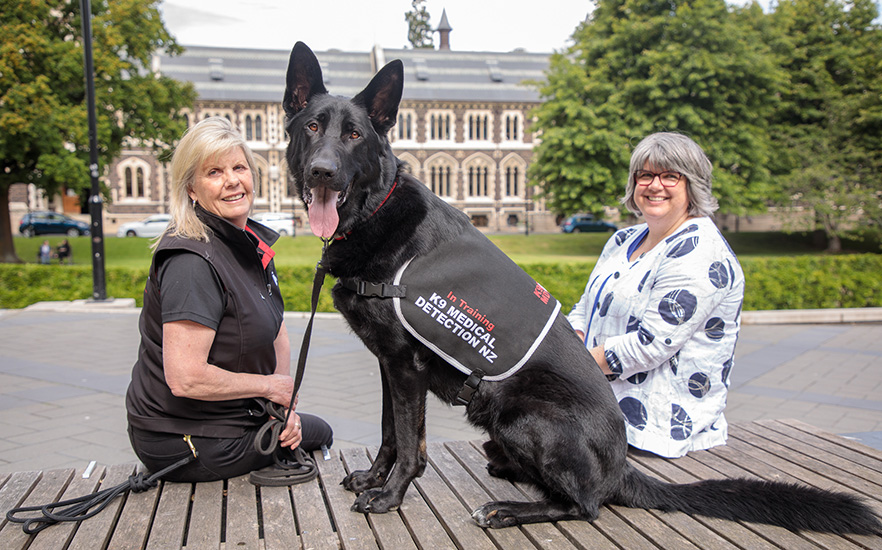 After less than a year of training, German shepherd Levi is successfully sniffing out bowel cancer cells in saline.

The University of Otago and K9 Medical Detection NZ are working together on New Zealand-first research to investigate using dogs as a diagnostic tool to sniff out bowel cancer – one of New Zealand’s most commonly diagnosed cancers.

According to the Bowel Cancer Foundation Trust, New Zealand can expect more than 3,000 people to be diagnosed with bowel cancer each year, with about 1,200 dying from it. It says 90 per cent of people can be saved if it's detected early enough.

Medical detection dogs, such as Levi, are trained to identify volatile organic compounds which are released from tumours present in medical conditions, such as cancer.
When it comes to detecting cancer, there is growing evidence that elevated levels of volatile organic compounds are associated with disease growth. Research has shown that dogs can be trained to detect these odours and identify the “signature smell” associated with cancer.

“Despite the disruption caused throughout the year by the COVID-19 pandemic, the data recorded from K9 Levi's odour work conclusively proves this working-line dog can detect various odour concentration levels of bowel cancer in saline,” she says.

“This success confirms our training methodologies and gives confidence for year two of this trial to repeat the process with the bowel cancer samples in urine.”

Levi has completed the initial scent imprinting training, during which time his trainer, Courtney Moore, pairs the positive cancer sample with reward using positive reinforcement and specific training methodology. Levi is still in training but is detecting positive cancer samples 92.8 per cent of the time, and ignoring samples that did not contain cancer 99.8 percent of the time.

“In New Zealand 23 people die from bowel cancer every week. My vision of creating a simple, non-invasive urine test for early detection of bowel cancer is now one step closer,” Blomfield says.

Otago’s Biostatistics Centre Director Associate Professor Robin Turner says the training results are “very promising”. The next step is validation; an experimental design in which the trainer also does not know whether the test samples are positive or negative for cancer. This ensures she is not influencing the results.

“These validation studies are what are required to show the test has high diagnostic accuracy.”

There will be a series of validation studies conducted; moving from using the current lab-grown cancer cells in saline to lab-grown urine and then finally to real patient samples.

“At each step of the way we will need to assess the accuracy both in terms of the science but also it provides feedback for the training,” Associate Professor Turner says.

“Levi is responding exceptionally well to the training and I’m very positive that the validation will show he has high accuracy.”

Bowel Cancer Foundation Trust CEO and Founder Georgina Mason, who initiated the project, is “blown away” by Levi’s achievements so far.

“We are really excited about these recent results and expect Levi to be able to replicate them replacing saline with urine from January. When he is able to do that, this research will be a world first and help put New Zealand at the forefront of bowel cancer detection.

“We believe if we can develop a highly accurate urine test using canine detection to help diagnose early stage bowel cancer, we can push those patients likely to have bowel cancer to the front of the colonoscopy queue and help save lives.”

Levi will soon be joined in his cancer-detection training by 16-month-old German shepherd, Weta.

“I am blown away by Levi's achievements and am very encouraged by the hard work he and Pauline's team have accomplished so far. Together we are all working hard to make a difference for bowel cancer patients in New Zealand and around the world,” Mason says.