Nutritional value of huhu grubs assessed for the first time 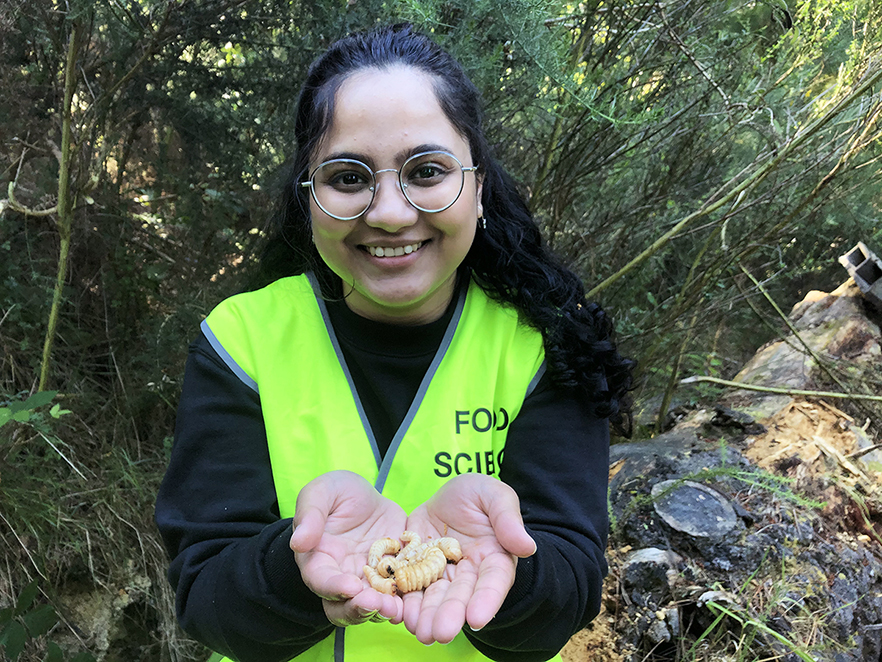 Huhu grubs have long been prized as a traditional food source and their nutritional value has just been analysed by University of Otago researchers for the first time.

The study of the mineral and macronutrient composition of huhu grubs (Prionoplus reticularis larvae) was undertaken by Food Science PhD student Ruchita Rao Kavle and the results have recently been published in the International Journal of Food Science and Technology.

Miss Rao Kavle says the analysis found huhu grubs had a high fat content – for which they have traditionally been known - but it was the high levels of protein that really stood out.

“We also found that the grubs were rich in essential minerals which all play vital roles in human health and nutrition, the most abundant been manganese, magnesium, phosphorus, iron, copper, and zinc,” she says.

The analysis was undertaken on wild huhu grubs during four different development stages of their life cycle, and which were harvested from a pine-forested site in Dunedin.

Miss Rao Kavle says based on the results, a person weighing 60kg would require around 170g of huhu, or about 75 huhu grubs, to meet the same daily protein requirement that could be sourced from 230g of beef.

“Compared to beef, a smaller amount of huhu needs to be consumed, but some people would find eating 75 grubs off-putting.”

Miss Rao Kavle’s research is also looking into options to process the grubs into more presentable forms such as flour and meals.

He says that even though huhu grubs have not been accessible commercially in New Zealand, there is an ever-growing interest in sustainability in food production, alternative proteins, and the need to diversify food sources.

“A focus on indigenous foods, particularly their unique nutritional and health properties, and alternative proteins is surging. This study on the huhu comes on the back of other research we have also undertaken on the larvae of several edible insects such as mealworms and black soldier flies,” Dr Agyei says.

The research concluded that New Zealand wild-harvested huhu is nutritious and safe for consumption, however the authors point out that as with most foods, moderate consumption is recommended, and the importance of variety and balanced diets cannot be overruled.