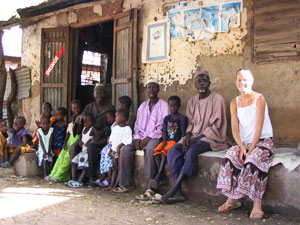 Efforts to prevent deaths among young sick children in developing countries could be significantly boosted through a broader understanding of the factors that improve their access to health facilities, according to new University of Otago research.

Study co-author Professor Philip Hill says that the researchers found that the traditional measures of health care access were surprisingly far less important than the other social and financial factors they investigated.

After studying 840 children in the Gambia in West Africa as part of her Master of Public Health degree, Merrin Rutherford and colleagues determined that traditional measures of access - such as time and distance to a clinic or hospital - were not as key as caregivers' support networks and financial resources in determining whether an under-five-year-old child died or not."Our findings indicate that improving health care access is not simply a matter of targeting difficulties in physically getting a child to a health facility.

To reduce death rates, support networks around caregivers need to be strengthened and the financial resources required when seeking help need to be increased," says Professor Hill, who is Director of the University's Centre for International Health.

Significant indicators associated with whether a sick child would live or die included the level of social support for the primary caregiver, such as having help to prepare meals or someone to turn to for good advice in a crisis, he says.

Among the other key factors were the caregiver's degree of control over household finances and the source of money for health-care expenses. The children of caregivers who could not make spending cuts elsewhere to cover the costs, or who had to do odd jobs to raise the money, were at greater risk of dying.

Professor Hill says the findings have important implications for designing new interventions against child death in the Gambia and other developing countries.

"Strengthening social support networks for children's caregivers might be achieved through community group development and by implementing community systems to provide them with the support they need when seeking health care."

Another important step would be to improve caregiver access to financial resources through tools such as microfinancing, he says.

"Every year, approximately 10 million children under the age of five die. Most of these deaths occur in developing countries - in many of these countries more than one in 10 children born die before they reach this age, compared to only one in 100 in New Zealand and other developed countries.

There is an urgent need for further research to confirm whether addressing these kinds of additional measures can reduce this toll," he says.

The study appears in the March edition of the Bulletin of the World Health Organization.