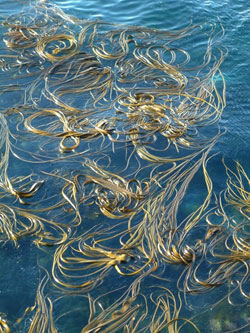 A University of Otago study of the genetics of modern-day kelp across the Southern Hemisphere has provided a surprising reinterpretation of climate conditions during the last Ice Age.

Ms Fraser says that by looking at the genetic patterns in bull-kelp across global scales, the researchers determined that the subantarctic region was only recolonised by the species very recently.

"The lack of genetic variation in subantarctic bull-kelp indicates that this colonisation almost certainly occurred since the end of the last Ice Age, which was around 20,000 years ago.

"Even though bull-kelp can survive low temperatures, this species is eliminated by ice scour. The best explanation for the genetic similarity of kelp - across enormous geographic distances in the subantarctic - is that sea ice wiped it out from many regions previously thought to have been ice-free," Ms Fraser says.

"This study reveals exciting new details about historic climate conditions. Understanding past climates is the key to predicting the rate and severity of future climate change."

Study supervisor Associate Professor Jon Waters says the use of modern DNA to assess historic climate conditions is an important new approach to reconstructing the past.

"It is essential that this kind of historical information gets incorporated into global climate models," Associate Professor Waters says.

The findings are published this week in the prestigious international journal Proceedings of the National Academy of Sciences, USA. The study was supported by the Marsden Fund of New Zealand.