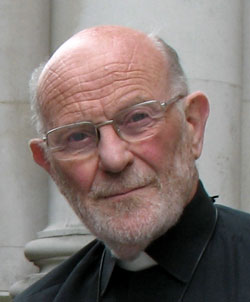 The University will confer the honorary degree of Doctor of Divinity on the Reverend Canon Paul Oestreicher, a distinguished Otago graduate who has fostered peace and reconciliation across many parts of the world.

Dr Oestreicher, who is a Canon Emeritus of Coventry Cathedral and a retired Director of its Centre for International Reconciliation, will receive his honorary degree at the graduation ceremony on Saturday 23 May. He will also deliver the graduation address.

Announcing the honour, University Vice-Chancellor Professor David Skegg says Canon Oestreicher has devoted his life to working for peace and social justice through his preaching, writings and work with the church and other international organisations.

"In early childhood, he was exposed to the effects of violence and hatred - including witnessing the Nazi 'Kristallnacht', having to flee Germany and later losing relatives in the Holocaust. Throughout his long career, his approach has been to tackle injustice, oppression and conflict by applying Christian principles such as reconciliation and forgiveness."

Professor Skegg says Canon Oestreicher has provided leadership in a variety of peace-related causes. These include the struggle against Apartheid and the Vietnam War, building bridges with communist Eastern Europe, promoting nuclear disarmament and working for the release of political prisoners. He has also been a vocal supporter of the ordination of women priests.

Before gaining asylum in New Zealand, Canon Oestreicher and his Jewish-born father and non-Jewish mother had spent months in hiding from Nazi authorities in Berlin.

In 1939, at the age of seven, he and his parents came to Dunedin. His paediatrician father, also named Paul, undertook several years of retraining at the Medical School required for registration in New Zealand and then set up a medical practice in George St. Both parents joined the religious group, the Society of Friends, otherwise known as Quakers.

Canon Oestreicher attended King's High School from 1945-49 and won a scholarship to the University. At Otago, he was active in the Student Christian Movement, became an Anglican and was an editor of Critic, the student association newspaper.

After graduating with a BA in 1953, majoring in Political Science and German, he went on to complete an MA at Victoria University of Wellington.

He then gained an Alexander von Humboldt Fellowship to the University of Bonn in West Germany, where he undertook research into the relationship between Christianity and Marxism. He later wrote two books on the Christian-Marxist dialogue.

In 1958, he completed his training for the Anglican ministry and the following year was ordained in St Paul's Cathedral, London. He was a curate in a working-class parish in East London until 1961. He then joined the BBC's Religious Broadcasting Unit as a producer for several years. Throughout his career he has been a freelance contributor to The Times (London), The Guardian and other publications.

As well as directing Coventry Cathedral's Centre for International Reconciliation from 1986 until his retirement in 2007, Canon Oestreicher has held a number of other leading positions in church and peace movements.

His activities outside the church include being one of the original members of Amnesty International and serving as its UK Chairperson from 1975-79. He is currently a Vice-President of the Campaign for Nuclear Disarmament UK and is a former Vice-Chair of that organisation.

In 2004, he received the Order of Merit of the State of Saxony for his work in encouraging reconciliation between Coventry and Dresden, cities which were both devastated by bombing during the War. Two years earlier, he received the Coventry Award of Merit for the same work.

Canon Oestreicher lives in Brighton with his wife Professor Barbara Einhorn, who has a PhD in German from Otago. He continues to write, speak and preach in Germany, New Zealand and the UK. He is also the honorary Quaker Chaplain to the University of Sussex.

On the day following the graduation ceremony, Canon Oestreicher will preach during the 10am service at St Paul's Cathedral in Dunedin.