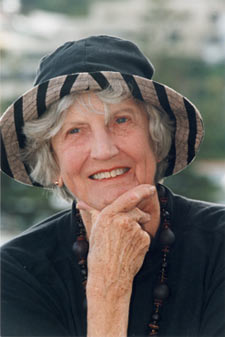 Acclaimed New Zealand fiction writer Barbara Anderson will receive the honorary degree of Doctor of Literature from the University of Otago this weekend.

Barbara Anderson graduated from the University of Otago with a Bachelor of Science degree in 1947.

She burst on the New Zealand literary scene in 1989 with her short story collection entitled I Think We Should go into The Jungle, published when she was 63.

The collection was shortlisted for both the Goodman Fielder Wattie and the New Zealand Book Awards, and was published in the United Kingdom in 1993 to excellent reviews, which placed her in the same category as the best short story writers in English of the previous 30 years.

Her novel Girls High followed in 1990, and her next book, Portrait of the Artist's Wife, won her the prestigious Wattie Book Award in 1992.

Vice-Chancellor Professor David Skegg says the honorary doctorate recognises Barbara Anderson's intellectual and artistic achievements, and the high regard in which she is held nationally and internationally.

"Barbara Anderson joins the company of other distinguished writers to whom this University has awarded honorary degrees in the past - people such as Janet Frame, Ruth Dallas and Cilla McQueen," he says.

"She has had a remarkable second career as a writer, and is renowned for her mastery of both the novel and the short story, showing great understanding of human nature and critical clarity."

After graduating with her science degree from Otago, Barbara worked as a medical technologist and as a science teacher in Hawke's Bay and Wellington, and raised her family.

Returning to university studies in her 50s, Barbara Anderson's love of writing drew her to Bill Manhire's creative writing course at Victoria University in 1983. Several of her stories were subsequently published in Metro, Landfall, Sport and the NZ Listener.

Emeritus Professor Lawrence Jones, an expert on New Zealand Literature, says Barbara Anderson's stories demonstrate her sharp eye and ear for telling social and personal detail, and her command of the techniques of the short story.

"Anderson's stories present a gallery of characters, mostly women, with their usually difficult life situations revealed and not resolved, seen against an economically and suggestively depicted society," he says.

"She restricts herself to worlds and occasions she knows - a girls' high school, a medical laboratory, a pharmacy, small-town New Zealand life in the 1930s and 1940s - and middle class marriage."

Barbara Anderson has said in the past that most of her stories came from "things I have imagined or remembered or half-forgotten, a combination of these."

Her 2008 autobiography, Getting There, was described by Kate de Goldi as "the best New Zealand autobiography since Janet Frame's."

Since winning the Wattie Book Award in 1992, Barbara Anderson has produced six more novels; her most recent, Change of Heart, in 2003. Two more books of short stories, The Peacocks: And Other Stories and Collected Stories were published in 1997 and 2005 respectively.

Her husband, Vice-Admiral Sir Neil Anderson, was the Chief of the New Zealand Defence Staff from 1981 to 1984.

The Graduation Ceremony is on Saturday 22 August from 3pm at the Dunedin Town Hall.