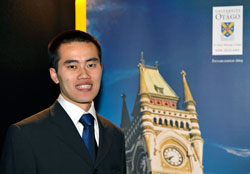 Research that holds promise for reducing the risk of heart attack, stroke and sudden death in people with heart conditions has been honoured at the MacDiarmid Young Scientists of the Year Awards.

University of Otago Masters degree student Mickey (Jui-Lin) Fan is researching the links between blood flow to the brain and breathing patterns, to learn more about what causes some people to stop breathing completely while they are asleep, a condition known as sleep apnoea.

Mr Fan, aged 24, has won the Masters level prize of the MacDiarmid Awards, presented by the Foundation for Research, Science and Technology. He receives a cash prize of $5,000. The award is sponsored by the Royal Society of New Zealand.

Travelling to the Himalaya mountains to conduct part of his research, Mr Fan was among a select few researchers to use the Pyramid Research Laboratory in the Himalayas. His research findings can be used to help develop new treatments to prevent sleep apnoea and reduce the risk of heart attacks.

He investigated how brain blood flow regulates breathing and how this flow can be changed to control breathing patterns, reducing the risk of heart attack. People with poor heart function also have lower brain blood flow and higher incidence of abnormal breathing, or sleep apnoea, which causes the level of CO2 and oxygen to fluctuate dramatically. At high altitude, people commonly develop abnormal breathing patterns during sleep. This includes periods of over-breathing (hyperventilation) and under-breathing and, in many cases, periods of around 20 seconds when breathing stops completely. A similar type of periodic breathing can also occur when people who have heart conditions are sleeping.

Mr Fan, who attended Wakatipu High School in Queenstown, is a keen mountain biker who competes at national level in the pro elite class. Earlier this year he won the Solo Singlespeed class at the Naseby 12 hour mountain bike race and was placed third at the Ay-Up 12 hour race in Rotorua.