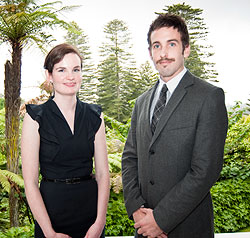 Otago's Tom Hills and Alice Irving, along with Auckland's Richard Stebbing, are the Rhodes Scholars elect for 2010 following a selection meeting at Government House in Auckland yesterday.

Tenable at Oxford University, Rhodes Scholarships constitute the pinnacle of achievement for university graduates wishing to pursue postgraduate study at one of the world's leading universities. In this country, the awards are administered by the New Zealand Vice-Chancellors' Committee.

Thomas Hills has been studying at the University's Dunedin and Wellington campuses. He was awarded the 2008 Fowler Scholarship for Top Overall Fifth-Year Student in the MB, ChB programme at the Wellington School of Medicine, University of Otago. In 2007, Thomas received the Charles Hastings Medal for Excellence in Medicine and the McGraw-Hill Award.

At Oxford, he intends studying for an MSc in Integrated Immunology leading to his eventual goal, a DPhil programme. Once his studies are complete, Thomas plans to return to New Zealand to train as a specialist. His experience to date includes participation in the 2008 Rural Medical Immersion Programme run by the University and a 2009 medical elective in Zambia.

Alice Irving has undertaken an LLB (Hons) and BA in Community and Family Studies at the University and should complete her studies midway through next year. She started her university education at Victoria University of Wellington in 2005.

At Oxford, Alice will undertake a Bachelor of Civil Law (BCL) and an MSc in Criminology and Criminal Justice. She intends to work as a criminal defence lawyer, then in social policy and legal reform work.

Alice has served as a volunteer at law centres and as a Pacific Island mentor and tutor at the Otago Faculty of Law. A runner up in the New Zealand Law Students' Association Mooting Nationals, Alice is Otago University's mooting champion and best speaker and has won numerous university prizes for law.

Born in Hastings, she attended Havelock North High School (Dux in Year 12). At secondary school Alice played canoe polo to regional representative level and was selected as a member of the New Zealand under-18 development squad. Her musical interests centre on the violin and she has played in both the Hawke's Bay Youth Orchestra and the Havelock North High orchestra.