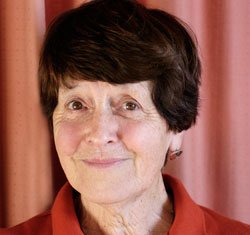 The University of Otago will confer the honorary degree of Doctor of Literature on New Zealand hymn writer Shirley Erena Murray at the Graduation ceremony on 5 December.

Mrs Murray, who lives at Raumati Beach, near Wellington, is an Otago graduate with an MA (Honours) in Classics and French.

She has been writing hymns with a distinctive New Zealand flavour since the 1970s; producing hymns such as 'Hymn for Anzac Day' (Honour the Dead), 'Hymn for Waitangi Day' (Where Mountains Rise) and 'God Bless Our Land.'

She has received international acclaim for her writing, becoming a Fellow of the Hymn Society of the United States and Canada this year, a Fellow of the Royal School of Church Music in 2006, and a Member of the NZ Order of Merit in 2001 for services to the community through hymn writing.

Her work has been published in more than 140 hymn collections worldwide and has been translated into many European and Asian languages.

She has recently had the honour of having no fewer than 22 of her hymns included in the highly esteemed Church of Scotland Hymnary (2005).

"There could be few creative writers in New Zealand who have achieved such international distinction in their field as Shirley Murray," says Professor Skegg.

The carol "Upside Down Christmas" is probably her best known carol, with lyrics set to music by Otago's Emeritus Professor Colin Gibson.

"They are distinguished by their inclusive language and their innovative use of Māori, their bold appropriation of secular terms and their original poetic imagery drawn from nature and domestic life, but equally by the directness with which they confront contemporary issues," he says.