Current dolphin protection measures not up to scratch 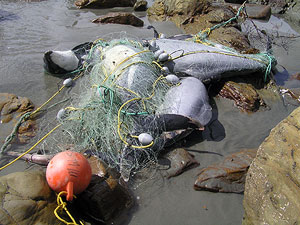 In an article appearing in the journal Aquatic Conservation, Associate Professors Liz Slooten and Steve Dawson studied the impact of the new measures.

Associate Professor Slooten says their detailed analysis shows that the protection measures put in place in 2008 by then Minister of Fisheries Jim Anderton are a large step in the right direction.

But dolphin populations are still declining because too many areas have been left out of the protection package or have been compromised in other ways, she says.

“For example, Tasman Bay, Golden Bay and Taranaki were left out and in other areas dolphins are declining because protection does not go far enough offshore.

At Kaikoura, local fishermen successfully sought an exemption to the dolphin protection measures. Everywhere else on the east coast of the South Island, dolphins are protected from gillnets to four nautical miles offshore.

An exemption was made on the argument that the deeper waters off Kaikoura are rarely used by Hector’s dolphins, she says.

“Unfortunately, the line for the exemption zone was drawn far too close to shore and a dolphin has already been caught in the exemption area.

“Simply too many compromises were made in the protection package. The dolphin that drowned in a net off Kaikoura last year confirms that.”