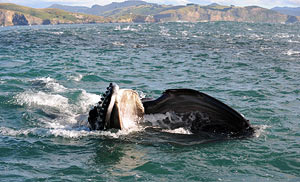 A humpback whale (Megaptera novaeangliae) feeding off the coast of New Zealand. Like all living baleen whales, humpbacks have to consume vast quantities of food in order to sustain their immense bodies, making them dependent on abundant prey and efficient food chains.
Photo: Stephen Jaquiery www.arcphoto.co.nz

A University of Otago PhD student has just gained a feather in his cap which many scientists spend a career dreaming of – he is the first author of a research report published in Science, one of the world’s most prestigious scientific journals.

Department of Geology PhD student Felix Marx’s article shows that the origin and evolution of modern whales was driven by a combination of food abundance and climate change. The article is co-authored by Dr Mark Uhen of George Mason University in the United States and appears in the journal’s latest edition.

“We know much about how ancient cetaceans first evolved from four-legged ‘landlubbers’ into the sea-going creatures of today, thanks to the last 20 or so years of research. On the other hand, many questions have remained about what drove the evolution of whales after their ancestors had become fully aquatic,” Mr Marx says.

The new research now settles uncertainty over whether the fossil record of whale diversity truly reflects the evolutionary history of modern whales, or whether it provides a flawed picture affected by the amount of preserved sedimentary rock available for palaeontologists to search, he says.

“Our analysis of rock, marine plant life and climate-related data sets that cover millions of years shows that the fossil record of cetaceans is in fact not the result of a misleading sedimentary rock record — this kind of bias really does not seem to be important here.”

“Instead, the diversity of fossil cetaceans seems to be related to the evolution and diversification of diatoms, a prominent group of tiny marine plants which help form the base of the marine food web.”

The fossil record clearly shows that diatoms and whales rose and fell in diversity together during most of the last 30 million years, he says.

“When diatoms are dominant in oceans, it creates a shortened food web that would enable more efficient foraging by whales, allowing them to grow larger, more abundant and more diverse.”

By looking at oxygen isotope records, the researchers were able to show that fossil whale diversity was also linked to changes in ancient climate. These isotopes can be used as a chemical fingerprint of oceanic temperature and global ice volume over large time scales.

“We concluded that the diversity of fossil cetaceans, far from being a mere artefact of rock preservation, was driven by a combination of food abundance – based on diatoms – and climate change. Both of these factors were probably in turn related to continental drift and changes in the Earth’s geography, in particular the isolation of Antarctica from all other continents about 30-40 million years ago.”

The isolation of Antarctica led to a new current that allowed high levels of nutrients to be spread into the upper layers of the world’s oceans, likely providing perfect conditions for diatoms to flourish, he says.

“The evolution and modern diversity of whale and dolphins may ultimately be the result of geological forces working at the very heart of our planet.”

Mr Marx says that he finds whales and other cetaceans fascinating as they have proved to be extremely adaptive animals over their evolutionary history.

“Due to their position at the top of the marine food web, whales are strongly affected by global environmental change. Discovering what the past impacts of these changes were will help provide us with new tools to predict how future global changes might affect the species,” he says.

The article abstract can be found at: http://www.sciencemag.org/cgi/content/abstract/327/5968/993