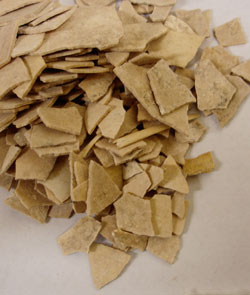 Ancient DNA from moa eggshell fragments
will provide new clues about how these birds became extinct across New Zealand.

In a world first, an international team of researchers, which includes University of Otago archaeologists Chris Jacomb and Richard Walter, has successfully isolated ancient DNA from eggshells of extinct birds.

Their findings are published today in the prestigious UK journal Proceedings of the Royal Society B.

“Previous attempts to recover DNA from fossil eggshell have been unsuccessful,” explains lead author Charlotte Oskam, an Otago MSc graduate who extracted the DNA as part of her PhD research at Murdoch University in Australia.

“Indeed, it was this potential to address important questions in New Zealand archaeology that drew Associate Professor Walter and me into this international collaboration.”

Being able to identify ancient moa DNA from archaeological samples provides a powerful new tool in understanding how the demise of moa occurred across New Zealand, he says.

“Not only can we now match eggshell to particular moa species, we can develop detailed models of hunting practice by looking at the family relationships of individual birds. This will help us understand hunting and extinction processes.”

In 2000, Mr Jacomb and palaeobiologist Richard Holdaway gained international attention for establishing the timing of moa extinction to within 150 years of human arrival, and the current work continues this collaboration, he says.

Building on the new DNA eggshell extraction methods, Mr Jacomb is leading a Marsden-funded project on the interactions between Polynesian hunters and moa, and the behavioural response of the hunters as the moa became increasingly scarce.

By combining the DNA techniques with analysis of stable isotopes in archaeological bone and eggshell, and integrating these with radiocarbon timelines, the team will produce a detailed model of the interplay between hunting practices and effects on the ancient New Zealand environment.