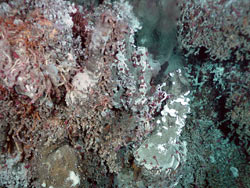 University of Otago scientists are shedding new light on how creatures living around undersea hydrothermal vents can thrive in an environment swirling with dangerously hot and toxic fluids.

Department of Marine Science researchers Dr Amanda Bates and Dr Miles Lamare, along with North American researchers from the University of Victoria and Washington State University, have shown for the first time that vent animals such as scale worms, snails and limpets actually prefer temperatures far cooler than the upper limits they have evolved to withstand.

The research, which was carried out in the North Pacific, New Zealand and Antarctica, has just been published as a featured article in the prestigious journal Nature Communications.

“Instead, it appears that these invertebrates ‘play it safe’ in their highly variable thermal environment by seeking to avoid temperatures that are well below the limits they can tolerate,” Dr Bates says.

In contrast, the researchers found that the non-vent species they studied would risk remaining in water temperatures that could lead to their death, she says.

“It appears that these vent species’ uniquely cautious behaviour helps prevent them from staying in spots that are more likely to experience sudden surges of superheated and poisonous fluids,” she says.

“We believe this behavioural mechanism may be just as important as their physiological adaptations in allowing them to thrive in their extreme environment.”

To carry out the study, the researchers used submersibles to collect specimens from more than a dozen species on vents at depths of up to two kilometres under the sea. The vents, which were located on the Juan de Fuca Ridge off the Pacific Northwest of the United States, bear names such as ‘Gollum’ and ‘Miserable’.

The scientists then studied the vent animals’ heat preferences and limits in specially designed aquaria, along with those of invertebrate species collected from marine and freshwater habitats ranging from the Antarctic seafloor to South Island mountain springs.

Funding for the study was provided by the National Sciences and Engineering Research Council of Canada, the United States National Science Foundation and by the University of Otago Research Committee. In New Zealand, the research was logistically supported by Antarctica New Zealand and the Department of Conservation.