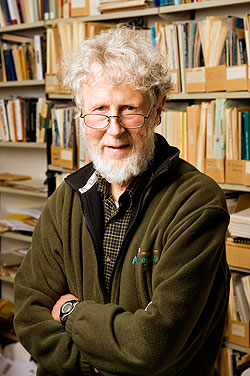 The University of Otago will confer the honorary degree of Doctor of Science on one of its most eminent scholars, Emeritus Professor Jim Flynn, at a graduation ceremony this Saturday.

Vice-Chancellor Professor David Skegg says Professor Flynn’s scholarship in areas including intelligence research, the “race and IQ” debate, and the defence of humane ideals has earned him international renown.

“In particular, his discovery and clarification of the large gains in IQ over time in many countries, which became known as the ‘Flynn Effect’, is widely acknowledged as a seminal contribution in the area of intelligence research,” Professor Skegg says.

In 2007, his book What is Intelligence: Beyond the Flynn Effect was published by Cambridge University Press to highly favourable reviews from a number of prominent figures including Harvard psychologist Steven Pinker and best-selling author Malcolm Gladwell.

Among the international honours he has received are appointment as a distinguished associate of Cambridge University’s Psychometric Centre, and being named as 2007 Distinguished Scientist of the Year by the International Society for Intelligence Research. He is on the editorial board of the journal Intelligence and has held distinguished visiting scholar positions at leading US institutions.

His work is also well known beyond academia, receiving coverage in publications with a worldwide circulation, such as Scientific American, Nature, Science and Newsweek. He has taken part in numerous radio and television interviews on his research.

“As a moral philosopher with no background in academic psychology, his mastery of the subject area and highly influential contributions are all the more remarkable,” Professor Skegg says.

Born in 1934, Professor Flynn spent his youth fighting racial segregation in the American South before coming to New Zealand in 1963. His later entry into the field of IQ was prompted by a desire to challenge claims that racial differences in IQ test scores were genetically based.

His sustained contributions over several decades to this often rancorous debate have been widely noted for their adherence to the highest academic standards and their intellectual honesty, Professor Skegg says.

He has also made his mark within his own discipline, in the field of humane ideals. He has published several books on this subject, including the widely-acclaimed How to Defend Humane Ideals (2000) and Where have all the Liberals gone?: Race, Class and Ideals in America (2008).

He was Professor and Head of the Department of Political Studies at the University of Otago from 1967-1997. Since his retirement, he has continued to be active in research and has held part-time teaching appointments in the Departments of Politics and Psychology.

As well as receiving the honorary doctorate, Professor Flynn will deliver the graduation address at Saturday’s ceremony.