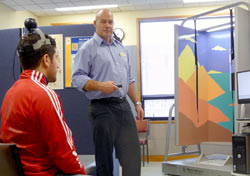 Young, top-ranked motorsport athletes display superior visual abilities when compared with normal sports people of the same age, according to a University of Otago study.

School of Physiotherapy Senior Lecturer and Associate Dean of Postgraduate Studies Dr Anthony Schneiders says the study researched the visual acuity in athletes involved in high-speed sports – comparing their results with a control group of fit and active sports people that were matched for age, weight, height and sex.

“The motorsport athletes came out on top across the entire range of tests,” he says.

“With the Perception Time Test in particular, the drivers were statistically superior over the control group,” Dr Schneiders says.

“This test involves the subjects being able to identify an object when it is flashed up on a screen very quickly. The drivers could identify specific objects that were only visible for 21 milliseconds, whereas the control group were approximately 25% slower.

“That ability to quickly identify things comes in handy if another driver cuts in, or if a crash occurs in front of you so you can react to it faster, taking a different line to avoid a potentially serious injury. The resulting faster perception time could also allow drivers to swiftly identify opportunities to pass.”

The School of Physiotherapy and the School of Physical Education conducts testing for the New Zealand Elite Motor Sport Academy which has an annual camp in Dunedin for promising young motorsport athletes who are up-and-coming race car drivers aged from 14 to 25 years of age. They come to the Physiotherapy School for specific testing in a programme organised by the New Zealand Academy of Sport-South Island.

Many of the nine young drivers tested for this study began racing from age six, driving karts. By the time they reach age 14 or 15 they had had a lot of driving experience. But Dr Schneiders adds that whether the superior acuity of their vision is innate or learned is difficult to say without further investigation.

“To be a top driver, it’s all often down to perceiving millimetres of difference to get the right line to take you efficiently around a corner or past another car. When negotiating corners and bends, drivers have to fix their gaze on the exit of the corner while thinking what’s ahead and what cars are around them, as well as adjusting front and rear brake balance and regulating the speed they are going.

“It’s a very demanding sport with uncomfortable physical conditions endured over long periods of time. It’s hot in the protective clothing, and you get thrown around and vibrated a lot while experiencing significant G-forces.

“It’s quite remarkable, considering all the factors, how extremely good these drivers are at focusing their vision.”

Dr Schneider’s paper states, “This study highlights the need for further research into the area of visual performance, particularly in motorsport and other high-speed sports, where such skills might be integral to performance and injury reduction.”

The tests were carried out using the School’s new Neurocom inVision System, the only system of its kind currently in the Southern Hemisphere. Among its many applications, inVision is able to measure what subjects see and how quickly they react to what they see. The system quantifies a patient's ability to maintain visual acuity and stable gaze when actively moving the head. Effective image stabilisation during head movement is a key factor while performing activities of daily living and in particular fast-paced sports activities.

“The exciting thing is that we can also potentially use the inVision equipment to train and improve the visual acuity of motorsport and other athletes,” Dr Schneiders adds.
The research has been well received internationally. The Vodafone V8 Supercar team in the Australian V8 Supercar series have already expressed interest in the research, asking how it can be applied to their drivers.

The preliminary nature of the report and small sample size of just nine motorsport athletes means Dr Schneiders is keen to continue and expand upon this line of research to place its statistical relevance and practical implications on a firmer footing.