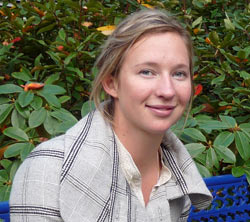 A University of Otago masters student who researched the damage caused to fabrics during stab events may see her research used to improve ways of identifying weapons used in crimes.

Stab injuries and fatalities are the most common crimes of violence in several countries, especially where access to firearms is restricted.

Despite this, Clothing and Textiles Sciences (CLTE) graduate Shelley Kemp found that, although it is widely accepted that there is a correlation between the type of weapon used in a stabbing and the type of severance in a victim’s clothing, there is little published research investigating damage caused to common apparel fabrics during stab events.

What data there was rarely investigated the effect age of the fabric had on the resulting damage or severance.

Supervised by Dr Debra Carr from Clothing and Textile Sciences and the Director of the Sir John Walsh Institute, and Faculty of Dentistry Professor Jules Kieser, Ms Kemp’s investigation involved a combination of human performance trials and laboratory testing.

Human trials are widely recognised to provide ‘real’ data, but as they can be variable the same weapons were also mounted to an impact rig which dropped each one onto the target to simulate a weapon strike.

For both types of experiments, the fabric specimens were mounted on a layer of silicone and foam to replicate a human torso.

Ms Kemp was initially encouraged to focus on this area of research by Professor Kieser, who has a significant interest in forensics and has collaborated with Clothing and Textiles Sciences staff for a number of years.

“In New Zealand you don’t have a lot of gunshot injuries, people tend to use knives. This sort of science-based evidence is very important in court and helps us keep ahead of the criminals,” Professor Kieser says.

“Shelley has come up with really important research in a scientifically rigorous laboratory environment. She has discovered there is a huge difference between laundered and unlaundered fabric. The way she has examined the nature and effect of stabbing and how to evaluate them is very exciting.”

Elements of the research have been published in Forensic Science International.

The journal article notes: “Perhaps the most famous example of forensic examination of apparel being used as evidence in a court case was during the Australian Azaria Chamberlain trial in 1980 when Azaria’s mother, Lindy Chamberlain claimed her child had been taken from the family camping tent by a dingo.

“In the initial case the Crown said the baby’s clothing had been cut with a knife, not torn by dingos’ teeth, but five years later the evidence that lead to Lindy’s release showed that dingoes were capable of making severances in fabric that looked like cuts.”