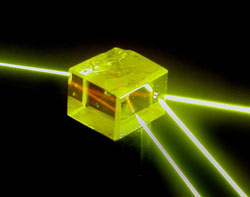 A University of Otago physicist is part of an international team that has developed the most efficient quantum “memory” for light in the world, an achievement that brings closer a future of super-fast computers and ultra-secure communications.

The findings of the Australian National University-led team, of which Otago’s Dr Jevon Longdell is a member, are published this week as the cover article of Nature, the world’s foremost scientific journal.

“As well as progressing ‘blue skies’ quantum technologies, there are applications which could spin out of this work in more everyday life, such as optical detection of ultrasound for health or engineering uses,” Dr Longdell says.

The researchers used a technique they pioneered to stop and control light from a laser, manipulating electrons in a crystal cooled down to minus 270 degrees Celsius. The system allows the delicate quantum nature of the light to be stored, manipulated, and recalled with unprecedented efficiency and accuracy.

Light entering the crystal, which is dosed with rare earth ion impurities, is slowed all the way to a stop, where it remains until released again. The process involves a highly accurate three-dimensional record of the light's quantum state being mapped onto the impurities.

Using stored information from the map avoids direct measurement of the light itself which, under the Heisenberg Uncertainty Principle, would affect its state, destroying its delicate quantum information.

Dr Longdell, who is a member of Otago’s Jack Dodd Centre for Quantum Technology, says that the approach breaks a major barrier that the uncertainty principle has imposed in developing quantum information processing.

“This memory has promising applications in further developing quantum-based technologies for secure communications, and its efficiency level of well over 50 per cent also overcomes one of the key hurdles in making quantum computers a reality.”

Quantum encryption takes advantage of the laws of physics which make it impossible to eavesdrop on quantum light pulses travelling in optical fibres without changing their state.

“Currently the distance these communications can be sent is limited to a few hundred kilometres, due to fibre absorbing the photons. Using repeater systems based on quantum memories could greatly extend the range of the technology.”

The memory is also a leading prospect for quantum computing, which has the potential to be many times faster and more powerful than contemporary computing.

The research team also says the light storage will allow tests of fundamental physics, such as how the bizarre phenomenon of quantum entanglement interacts with of the theory of relativity.

The team has previously performed an experiment that ‘stopped’ light in a crystal for over a second, more than 1,000 times longer than was previously possible. They are now bringing together systems that combine the high efficiency with storage times of hours.

Dr Longdell’s group at Otago will continue to work with the Australian team to find ways to increase the bandwidth of the memory to allow the higher speeds necessary for developing practical applications.

The research team is led by Dr Matthew Sellars of the Australian National University.

The lead author of the current Nature article is his ANU colleague Morgan Hedges with Dr Longdell and Dr Yongmin Li of Shanxi University as co-authors.