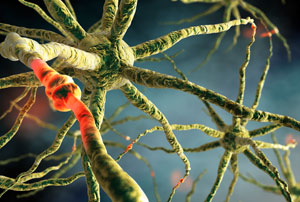 A previously hidden mechanism regulating how brain cells communicate has been discovered by a University of Otago scientist in collaboration with colleagues at the University of Aberdeen. The researchers believe targeting the mechanism may lead to new therapies for the symptoms of motor neurone disease.

Their findings are newly published in the prestigious US journal Proceedings of the National Academy of Sciences (PNAS).

“We did not predict this, and the finding fundamentally alters our understanding of how communication between cells in the brain’s motor system is controlled. It is also likely that this mechanism plays a role in other brain signalling systems.”

Historically it was thought that the information flow from cell to cell was controlled by the number of quanta, or packets, of neurotransmitter chemicals released at any one time across specialised cell junctions known as synapses, he says.

“Now we have found good evidence that the TGF-β2 protein regulates the size of the packets released and thus the amount of neurotransmitter they contain. This gives the protein a key role in allowing synaptic signalling to successfully occur.”

Associate Professor McLennan says his interest in delving into how TGF-β2 acts in the brain stems from his earlier findings that administering the protein relieved symptoms of early-stage motor neurone disease in mice.

“Unfortunately, while it is harmless to mice, TGF-β2 is known from other studies to be highly toxic when administered to humans. Now that we are aware of how TGF-β2 works we will look for other ways to take advantage of this signalling system to pursue non-toxic therapies.”

Any resulting therapy would not be a cure for motor neurone disease, but may be able to alleviate symptoms during the early stages of the devastating condition, he says.

The study was supported by the Marsden Fund of New Zealand.

Associate Professor McLennan says the basic research supported by the Marsden Fund continues to open possibilities for his team’s search for new drugs for degenerative conditions.