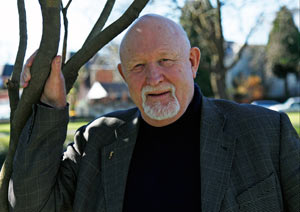 The Director of the acclaimed Christchurch Health and Development Study (CHDS), Professor David Fergusson, is this year’s recipient of the University of Otago’s highest research honour, the Distinguished Research Medal.

For three-and-a-half decades, Professor Fergusson has been a driving force behind the internationally recognised study, which has closely tracked the progress of 1,265 people born in Christchurch in 1977.

The University awards the Distinguished Research Medal for outstanding scholarly achievement, including the discovery and dissemination of new knowledge, the development of innovative technology, or the development of concepts that lead to significant advances.

Vice-Chancellor Professor David Skegg says that as a researcher in his own right, and as Director of the CHDS, Professor Fergusson has made exceptional contributions to the international literature across a wide range of issues in human health and development.

“David Fergusson’s record of research publication is notable for its high quality, volume and impact. During his career at Otago, he has written more than 530 research papers, books and reports carefully investigating the factors that influence health and well-being in childhood, adolescence and young adulthood,” Professor Skegg says.

His work has provided important new insights relating to areas such as early intervention for at-risk children, breastfeeding and IQ, cannabis use, domestic violence, abortion and mental health, suicidal behaviour, and the later mental health impacts of childhood sexual abuse.

The Study’s early findings included some of the first evidence internationally that parental smoking causes respiratory problems in infants, and that even low levels of lead exposure in childhood are linked with persistently lower educational achievement over time.

Professor Fergusson has contributed strongly to social and health policy development in New Zealand through his research and expertise, Professor Skegg says.

One key insight from the Christchurch study has been that children from families facing multiple problems, stresses and difficulties have a greatly increased risk of developing later severe problem behaviours.

This finding led Professor Fergusson in 1995 to co-found Early Start, a related study aimed at evaluating the benefits of a home visitation programme undertaken by trained family support workers.

Professor Skegg says that a hallmark of Professor Fergusson’s career as a researcher has been his insistence that efforts to identify and combat social ills should always be based on robust evidence.

Professor Fergusson gained a BA (Hons) from Victoria University of Wellington in 1969. That same year he joined the Department of Social Welfare, where he spent seven years in research positions focusing on child welfare, and later, young offenders.

In 1976 he joined the University of Otago, Christchurch as a Principal Investigator in the Christchurch Child Development Study, as it was then known. In 1988, he was appointed Executive Director of the CHDS and in the following year received his PhD from the University.

Previous national and international honours for his research achievements include being made a Fellow of the Royal Society of New Zealand, and an Honorary Fellow of both the New Zealand Psychological Society and the Royal Australasian College of Physicians.

Professor Fergusson says that, having worked for the University of Otago for more than 35 years, it is extremely gratifying to receive its Distinguished Research Medal.

“It is important for me to acknowledge that this award is not based solely on my work, but that of all the staff of the Health and Development Study. Recognition must also be given to the 1265 families who took part in the study.”

Professor Fergusson will receive the medal when he delivers a public lecture early next year.