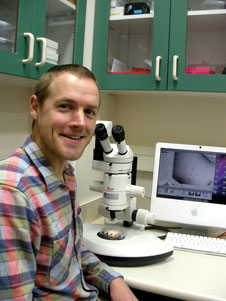 A University of Otago scientist has led trans-Tasman research that has created the first three-dimensional image of a key protein involved in the development of blood and other cancers.

The researchers have shown how the protein, called Trib1, plays a vital role in controlling how and when other proteins are degraded, which is essential for balancing protein levels in the cell.

The findings by Dr Peter Mace of Otago’s Department of Biochemistry and colleagues Dr James Murphy and Dr Isabelle Lucet from Australia’s Walter and Eliza Hall Institute (WEHI) are published today in the international journal Structure.

Dr Mace says solving the structure of Trib1 could help in developing new drugs to treat cancers such as acute myeloid leukaemia (AML), which can be caused by excess Trib1 protein driving abnormal production of white blood cells.

Trib1 is part of the protein family Tribbles, which play diverse roles in cell signalling and development. Tribbles are named after the small, furry creatures from Star Trek that reproduce uncontrollably.

Tribbles are unusual types of proteins called pseudokinases, which have been described as ‘dead’ enzymes because their structures evolved to leave them incapable of catalysing chemical reactions.

Dr Mace says the discovery in the early 2000s of a range of pseudokinases persisting in cells was initially puzzling, until it became clear that they were now performing other important non-enzymatic functions.

The researchers used powerful X-ray beams at the Australian Synchrotron to obtain the detailed three-dimensional images of Trib1, revealing that its structure had been hugely contorted compared to related proteins that do function as catalysts.

Instead of driving chemical reactions Trib1 acts as a scaffold to bring many proteins together, and the team discovered how Trib1 “recruits” specific proteins to be degraded.

“As well as explaining how Trib1 functions, our research into its structure could help us design novel therapeutic agents to block its overproduction in AML.”

Dr Mace says that beyond AML the researchers are very interested in looking at Trib1 function in other cancers where it is overexpressed.

“There is already some evidence that Trib1 plays a role in prostate cancer but this is fairly new ground so we have a lot to learn” he says.

In collaboration with Department of Biochemistry colleague Dr Anita Dunbier, the team is investigating the role of Trib1 in breast cancer. This project is supported through Health Research Council grant awarded this year.