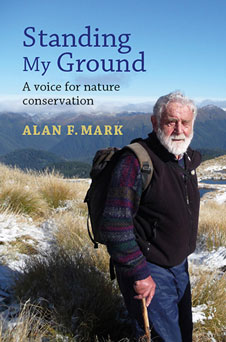 As long-time Professor of Botany at the University of Otago his career has combined rigorous science with committed environmental activism. In his newly published autobiography Standing My Ground: A voice for nature conservation, Mark gives an account of his life and work – a career that has spanned over five decades (and continues).

“My greatest satisfaction has been being able to convey to the wider public the value of natural areas and the significance of integrating ecological principles to achieve the sustainable use of natural resources,” he says.

His record of communicating the science to the public and politicians has given Alan Mark a distinctive mana. His robust understanding of ecological environments and his ability to articulate rationally the consequences of development have made him one of the most authoritative figures within New Zealand conservation.

Emeritus Professor Mark’s impact has been profound: his research into snow tussock, showing how the tussock was a crucial water-gatherer in the high county, literally changed the way that we viewed the uplands. His findings also showed the destructive consequences of high-country runholders’ practice of burning combined with grazing the recovering tussocks.

When this research was published Emeritus Professor Mark found himself in the firing line not only from the runholders but from some local and central government officials as well. This was the first time, but far from the last, he would come under attack from important people with big voices. In the end, 15% of New Zealand's original grasslands have been protected.

Alan Mark’s research, combined with his effective advocacy was pivotal in the 13-year-long campaign to preserve Lakes Te Anau and Manapouri in their natural state while generating about 15 per cent of New Zealand’s electricity: the first time a major development scheme was successfully opposed on environmental grounds. But there have been devastating losses too, most recently the failure to save the Denniston Plateau from mining.

“In this instance and others there is small satisfaction in knowing you gave it your best shot.’

Standing My Ground documents important conservation battles and tells the story of a genuinely humble man who is one of the most outstanding New Zealanders in his field.