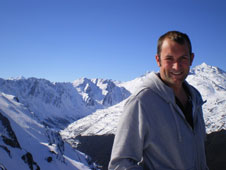 A University of Otago-led international research team has resolved the mystery of the processes involved in the Mediterranean Sea drying up around 5.6 million years ago.

The event, known as the Messinian Salinity Crisis (MSC), saw the Mediterranean become a 1.5km deep basin for around 270,000 years. It also left a kilometres-deep layer of salt due to seawater evaporation.

The cause of the MSC has been the subject of vigorous scientific debate, but now an international team of researchers led by Otago geologist Dr Christian Ohneiser have used a multidisciplinary approach to solve the puzzle.

Their findings are published this week in the prestigious international journal Nature Communications.

After the MSC was discovered in the 1970s, the early theory was that movements of the African, Arabian and Eurasian tectonic plates had led to the Mediterranean becoming landlocked. Later on, other scientists suggested that it was a global fall in sea levels due to growing ice sheets that cut the sea off from the Atlantic Ocean.

Dr Ohneiser and colleagues examined 60 sedimentary drill cores from around the edge of Antarctica.

“We determined that the continent’s ice was indeed growing in the lead up to the MSC, but the timings of key events did not precisely match,” Dr Ohneiser says.

The researchers then used a computer model of the Earth that simulated growth in the Antarctic ice sheet to see what geophysical impacts this would have aside from generally lowering the sea level.

“We found that the Antarctic ice sheet had an uneven effect on the global sea level because its growth resulted in a complex interplay between gravitational and rotational effects and the deformations to the Earth’s crust caused by ice advance and retreat,” he says.

The researchers determined that as the Mediterranean Sea evaporated, the Earth’s crust around the Strait of Gibraltar began rising up because the overlying load from the water was removed.

“This kept the Mediterranean isolated from the Atlantic Ocean until the crust began to relax and sink. At the same time, Antarctica began to melt, raising sea levels again.”

By around 5.33 million years ago, the rising sea level was just enough to wash over the thin land bridge at Gibraltar, resulting in a catastrophic flood that refilled the sea, he says.

Other researchers have previously shown that this deluge, known as the Zanclean flooding event, took only a few years to fully replenish the Mediterranean.

Dr Ohneiser says that one of the key implications of the study is that changes in global sea-level are uneven when ice sheets expand or retreat.

“Future melting of the large Southern or Northern hemisphere ice masses will result in an uneven rise in sea-level around the world, and this should be factored into future climate change scenarios,” he says.

NB Dr Ohneiser is currently in Antarctica but is contactable by email until 15 November.