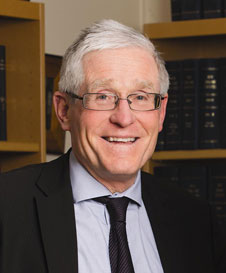 A team of researchers supported by the University of Otago’s Legal Issues Centre has been awarded $150,000 research funding from the New Zealand Law Foundation to continue their research into access to justice for injured New Zealanders dealing with the Accident Compensation Corporation (ACC).

“It is great news that research is being done which will provide the basis for assessing whether or not claimants for ACC are getting a fair deal in terms of their resources to provide evidence to support their claim. Given the ACC ‘social contract’ system is New Zealand’s solution to the endless litigation found in other jurisdictions, it is really important that the ACC system is being implemented in a fair and just way for the whole New Zealand community,” says Professor Mark Henaghan, University of Otago Dean of Law and Acting Director for the Legal Issues Centre.

“Only a few days ago there were reports about how ACC deals with paying attendant care to families caring for their family members. It is vital that ACC’s practices are subject to regular scrutiny by the Courts,” says Professor Henaghan.

The $150,000 grant from the New Zealand Law Foundation will cover staff costs to allow researchers to undertake the next step following their previously successful research: Understanding the Problem. The research team will be supported by the University of Otago and support group Acclaim Otago Inc.

Warren Forster, lead researcher from Acclaim, explains: “Having identified problems with access to justice for the ACC system, now we need to try and do something about it to improve people’s experiences. We were encouraged by the Minister’s timely decision to pursue further consultation in July 2015,” Mr Forster says.

“This next step is the hardest and the most important. We need support from the government, the legal profession and the community to work collaboratively to address these problems. We already have commitments from several senior practitioners in this area and we are hopeful the Government will come on board.”

The authors look forward to a constructive dialogue with stakeholders in the ACC system and advancing towards a human rights focus for the ACC system.

The researchers remain committed to meaningful dialogue with the Minister for ACC and her officials as they work collaboratively to solve the underlying problems in the personal injury system.

Acclaim Otago was formed in 2003 to provide support to people experiencing ACC’s harsh work capacity testing regime. Many of their members have been through the ACC dispute resolution and appeals process.

Understanding the Problem – what was found

The previous research project showed people disputing ACC decisions lack the resources required to present an arguable case. The report found that claimants were not getting access to justice and that reform was needed to address these barriers: