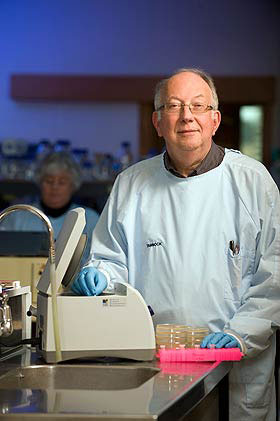 A University of Otago scientist has received $1M to lead research into extending energy release from food to allow a better night’s sleep for babies during weaning.

Otago microbiologist Professor Gerald Tannock’s team will pursue the development of a new food for evening meals. The food will contain novel dietary fibres that better sustain energy release through the night so babies won't wake up from hunger.

The research project is one of seven to be funded with a total of $7M in High-Value Nutrition National Science Challenge funding to be announced on Wednesday evening.

Professor Tannock aims to develop a weaning food with optimal mixtures of dietary fibres that would enable a sustained energy harvest by bowel bacteria during the night so as to satisfy the body’s needs until morning.

“Bowel bacteria degrade and ferment dietary fibres that are otherwise indigestible. The products of this fermentation are organic acids that are absorbed from the bowel and provide energy to the body,” Professor Tannock says.

As opposed to energy gained from easily digested food, this process takes time and provides a slower, more sustained energy release into the body, he says.

Professor Tannock says an eclectic team of scientists, with expertise in microbiology, nutrition, carbohydrate chemistry, food science, sleep, energetics, and food formulation has been assembled to carry out this exciting research.

High-Value Nutrition is one of eleven National Science Challenges. The challenge has an $84million budgeted investment over the next ten years. Its mission is to establish New Zealand as an international leader in food–for–health and help grow exports by $1billion by 2025.